Skip to the content
Quick Stats
Fallout Shelter the Board Game
Fallout Shelter is a surprisingly fun little worker placement game in a relatively small, very on theme package. For those that are fans of the Fallout universe, the first thing you’ll notice is that Fallout Shelter come packaged in a little lunch box-like tin! Fallout typically has secret lunch boxes hidden throughout the games environments that often contain items of note. Fallout Shelter is a game (for mobile or any other gaming platform) about maintaining your own Fallout Vault as it’s Overseer and the duties that entails: keeping your Vault Dwellers happy, fending off invaders, building new and interesting rooms, and assigning workers to various tasks. Fallout Shelter the board game takes those themes and turns them into a dice-based worker placement game that can be enjoyed even if you’ve never even heard of the Fallout franchise before!
The items of note in Fallout Shelter are really all of the great little minis contained within. You get 28 total minis, split between four colors (Grey, Brown, Blue, and Yellow) with 7 unique poses. They’re all a nod to the S.P.E.C.I.A.L. illustrations chart known in the Fallout universe, more on S.P.E.C.I.A.L. later. 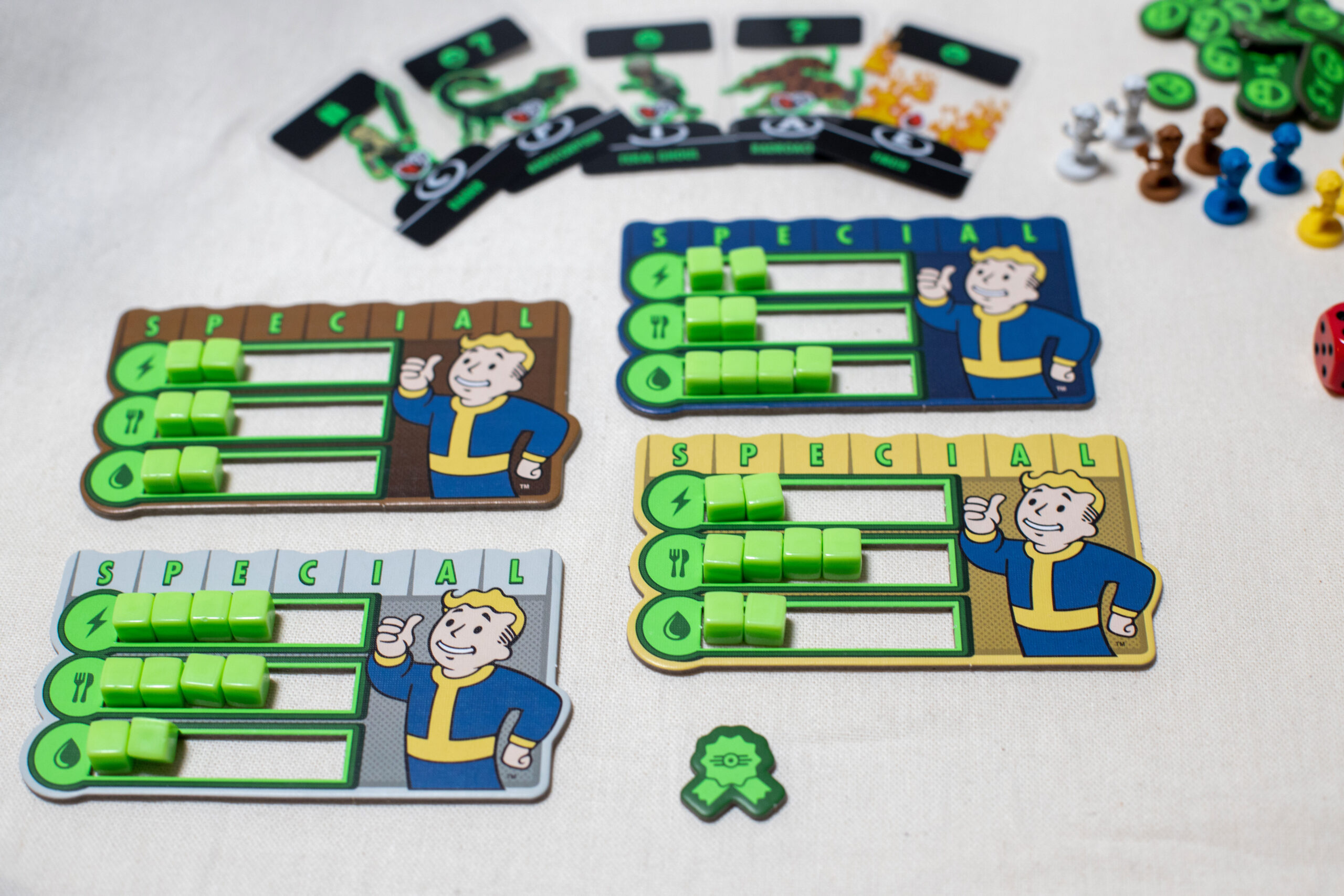 Initial Set-up
You’ll want to find the elevator and six rooms with red backs and form an elevator shaft to go down the center of the vault. Then you’ll grab your items deck, lay out 3 cards from the top as shown below, followed by three room cards to create a supply. Make a small space for the green resource cubes and happiness tokens nearby, and then lay out the Wasteland, Vault Door, Vault Entrance, Water Treatment, Diner, and Power Generator rooms as shown below. Any cards shown below beyond those listed are from later in the
game. 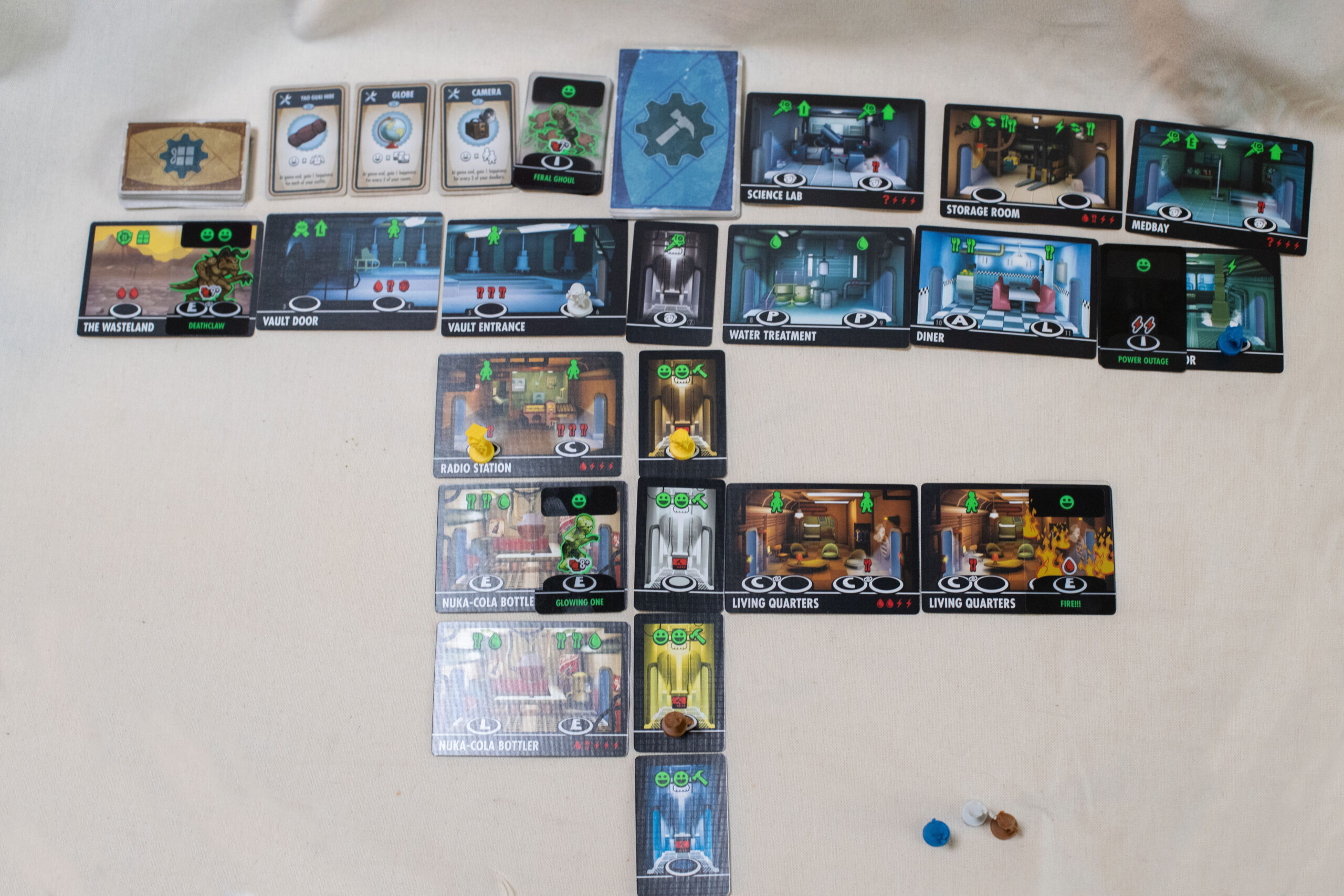 From there you’ll each take turns placing Dwellers, dealing with threats (zombies, fires, raiders, and even the famous Deathclaws), and gaining items to deal with those threats! At the end the player who has generated the most happiness wins! Each room in the vault will have various spaces (some that require 2 Dwellers) that will allow you to gain items, happiness, additional Dwellers, and the opportunity to build additional rooms for your Dwellers to visit!
The various threats you’ll encounter are dealt with by rolling the two D6 dice included with the game, augmented by the items that each player has acquired. There’s armor, pets, guns, and miscellaneous  crafting items like duct tape and circuit boards famous in the Fallout universe. The threats come on a cool transparent cards similar to Gloom or Mystic Vale, and the ‘power outage’ card (see above right, in the Power Generator room) even darkens out that space.
Dealing with threats can leave your dwellers in one of two conditions: Healed or Injured. An injured Dweller is placed on its side and can be healed by moving them to any space with a Stimpak (the needle looking item) over the space.

Player Progress and S.P.E.C.I.A.L.
Each player should choose a Resource tracker upon their entry into the vault. They’re the cards with the tree slots cut out of them with S.P.E.C.I.A.L. at the top. These help you keep track of your three main resources: Electricity, Food, and Water. Through placing your Dwellers in various rooms within the vault you’ll be building. The name “S.P.E.C.I.A.L.” is an acronym standing for the primary statistics in the system: Strength, Perception, Endurance, Charisma, Intelligence, Agility and Luck. You’ll see each of these letters on various spaces within the vault that will give you bonuses if you’ve powered up your Dweller with the corresponding stat. If you place a Dweller on a space that has a letter that corresponds to the same letter you powered up a Dweller with (say ‘E’ for example) you’ll gain 2x the resources indicated on that space.
Summary
If you like relatively quick ( around 45 mins) worker placement games that are quick to pick up you’ll love Fallout Shelter. It really is a ton of fun and doesn’t take a ton of time to pick up