Like previous Commander releases, all of Commander 2019’s decks were designed around a central theme, and this year that theme is Mechanics. Each of the four Commander 2019 decks is themed around a single mechanic and have a commander that emphasizes said mechanic. The four mechanics are populate, madness, flashback, and morph, which were accidentally revealed by a product listing two weeks ago.

Preorders are available by the carton (1 of each deck) only. Individual decks will be available on release day. Local pickup only. All pre-paid orders earn double reward points, which results in roughly a redeemable savings of $30 immediately.

Preorders are now closed, but you can pick up individual decks on release day! 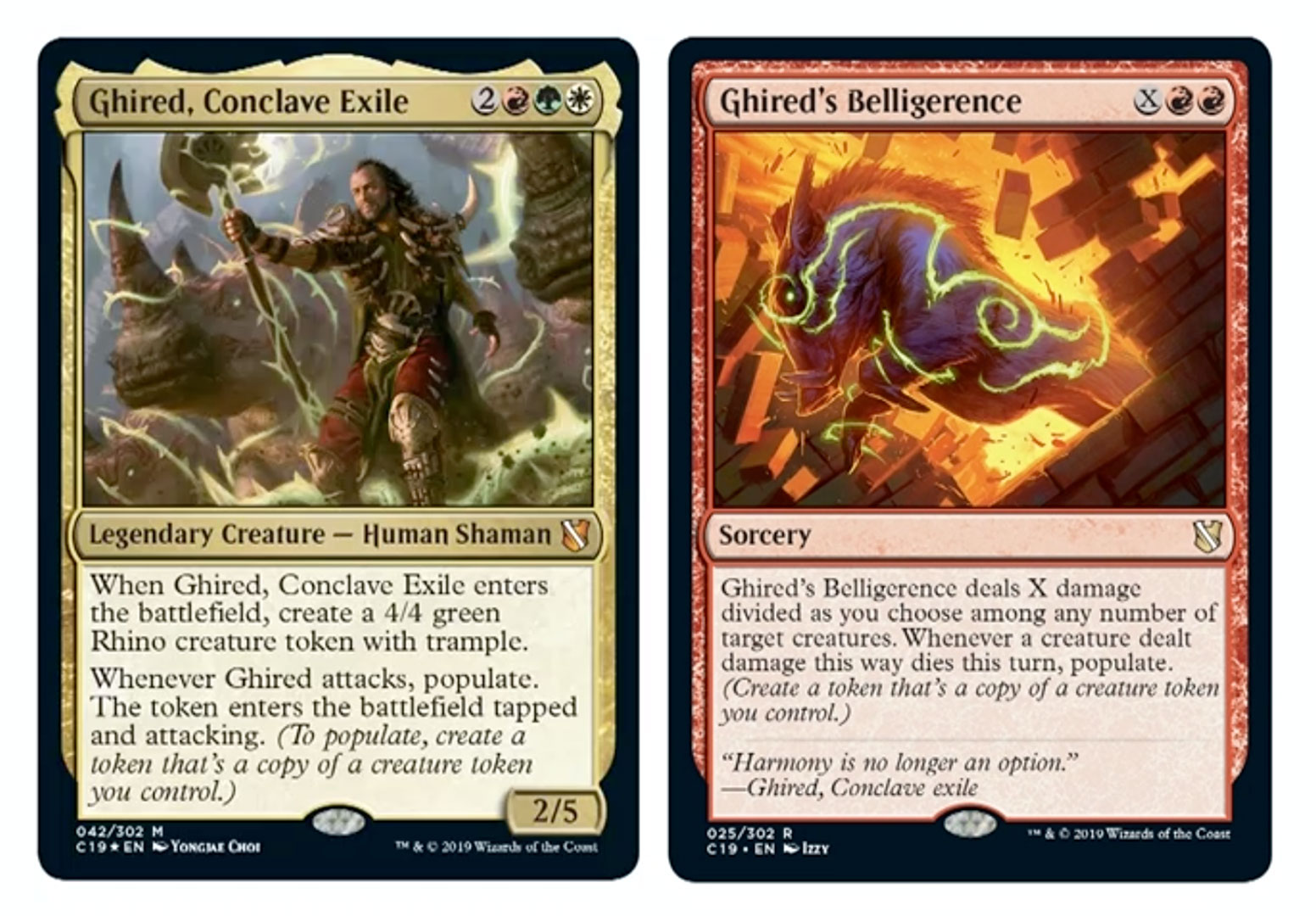 Ghired, Conclave Exile will command the Naya-colored Populate deck in Commander 2019. Populate is a mechanic originally from Return to Ravnica (2012) where it was Selesnya’s guild mechanic. It is a token-focused mechanic and allows you to make a copy of a creature token that you control. As such, Ghired, Conclave Exile‘s Primal Genesis Populate deck will feature a heavy token theme. 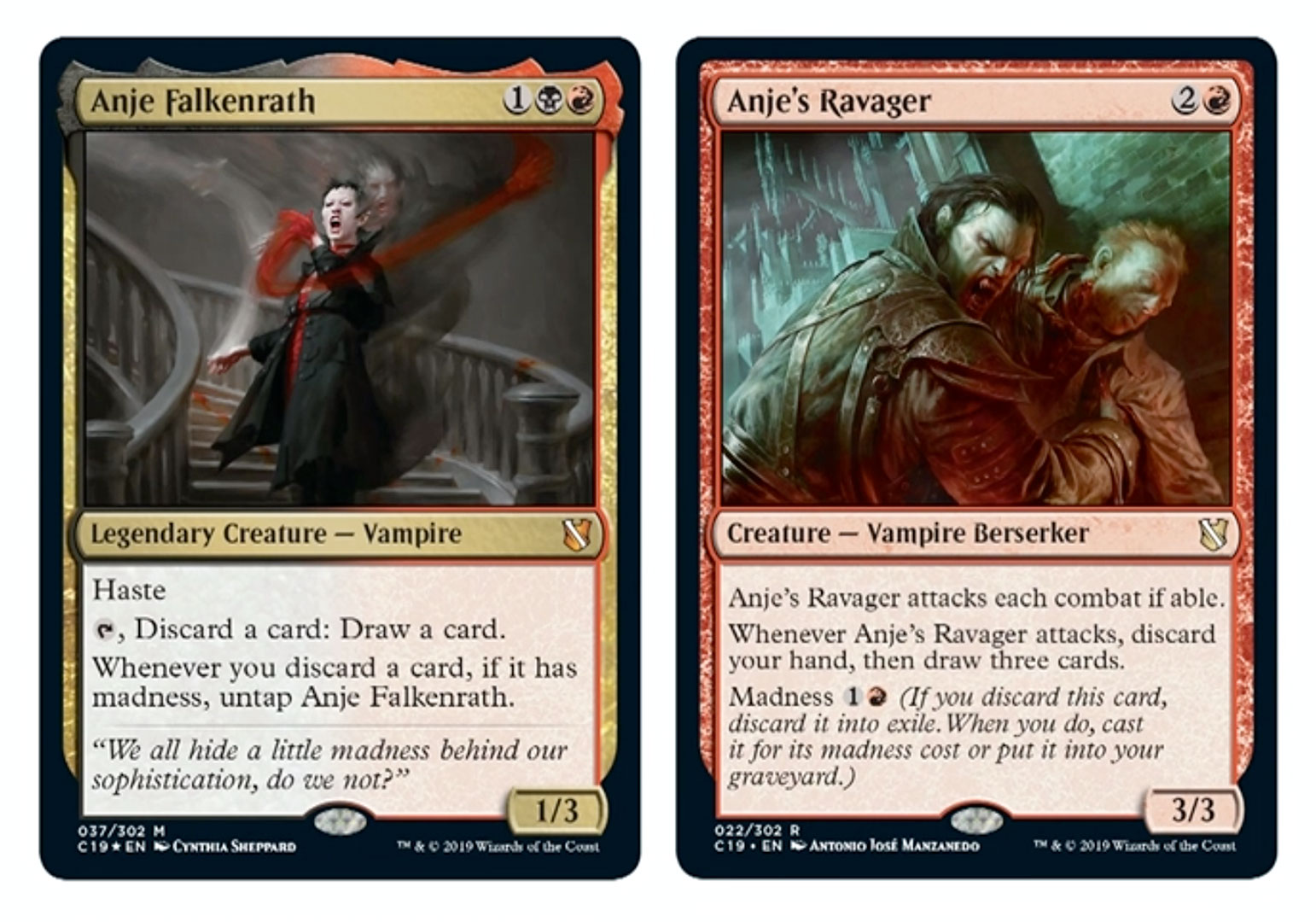 Anje Falkenrath will command the Rakdos-colored Madness deck in Commander 2019. The Madness mechanic debuted all the way back in Torment (2002) and is one of the least intuitive—and most powerful—mechanics in Magic’s history. It allows you to cast a card as it is being discarded for an alternate (often reduced) cost. As Anje Falkenrath‘s activated ability indicates, her Merciless Rage Madness deck will focus on giving you ways to discard your Madness cards and cast them, all while drawing more Madness cards to discard. 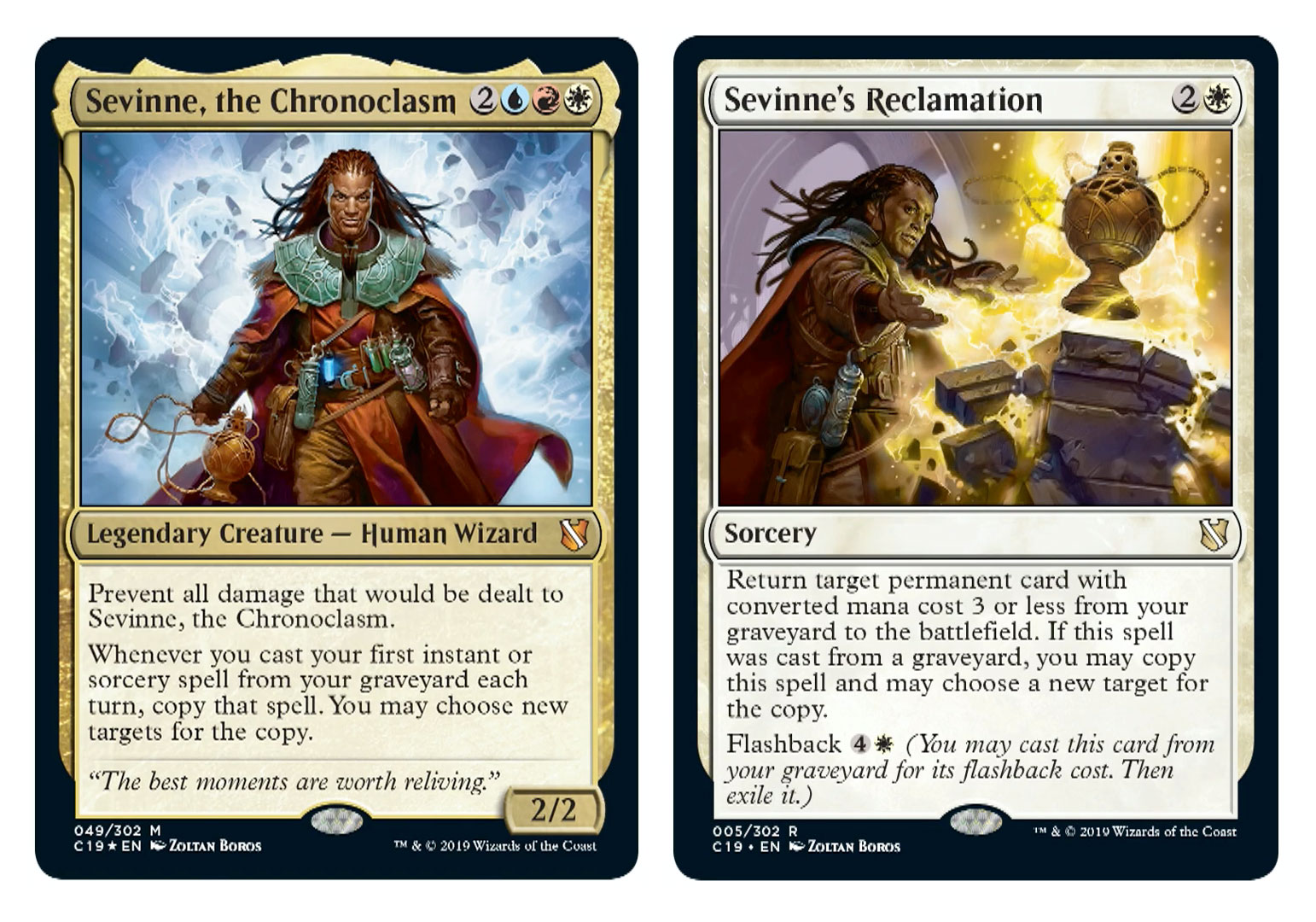 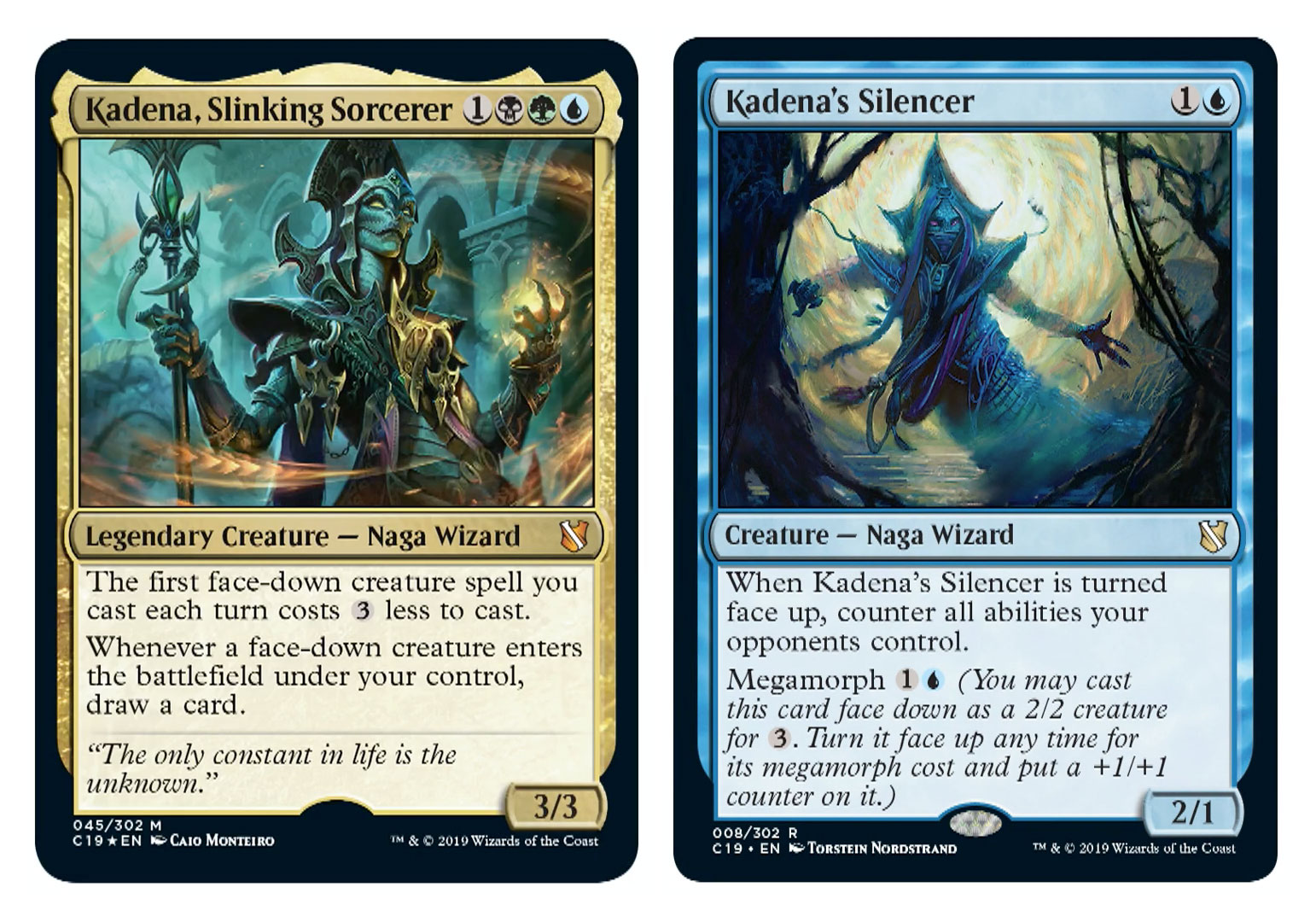 Kadena, Slinking Sorcerer will command the Sultai-colored Morph deck in Commander 2019. Morph first appeared in the Onslaught block (2002-2003) as a way to try and get Illusionary Mask and Camouflage to work better within Magic’s rules. Kadena, Slinking Sorcerer‘s Faceless Menace Morph deck will focus on creatures with Morph that have spell-like effects when they are unmorphed.

Didn’t get enough in new Phyrexia, well, brace yourself. 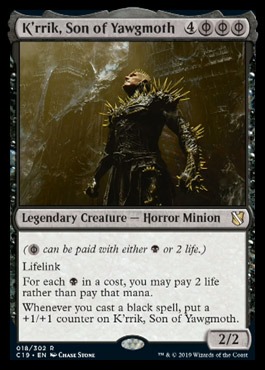 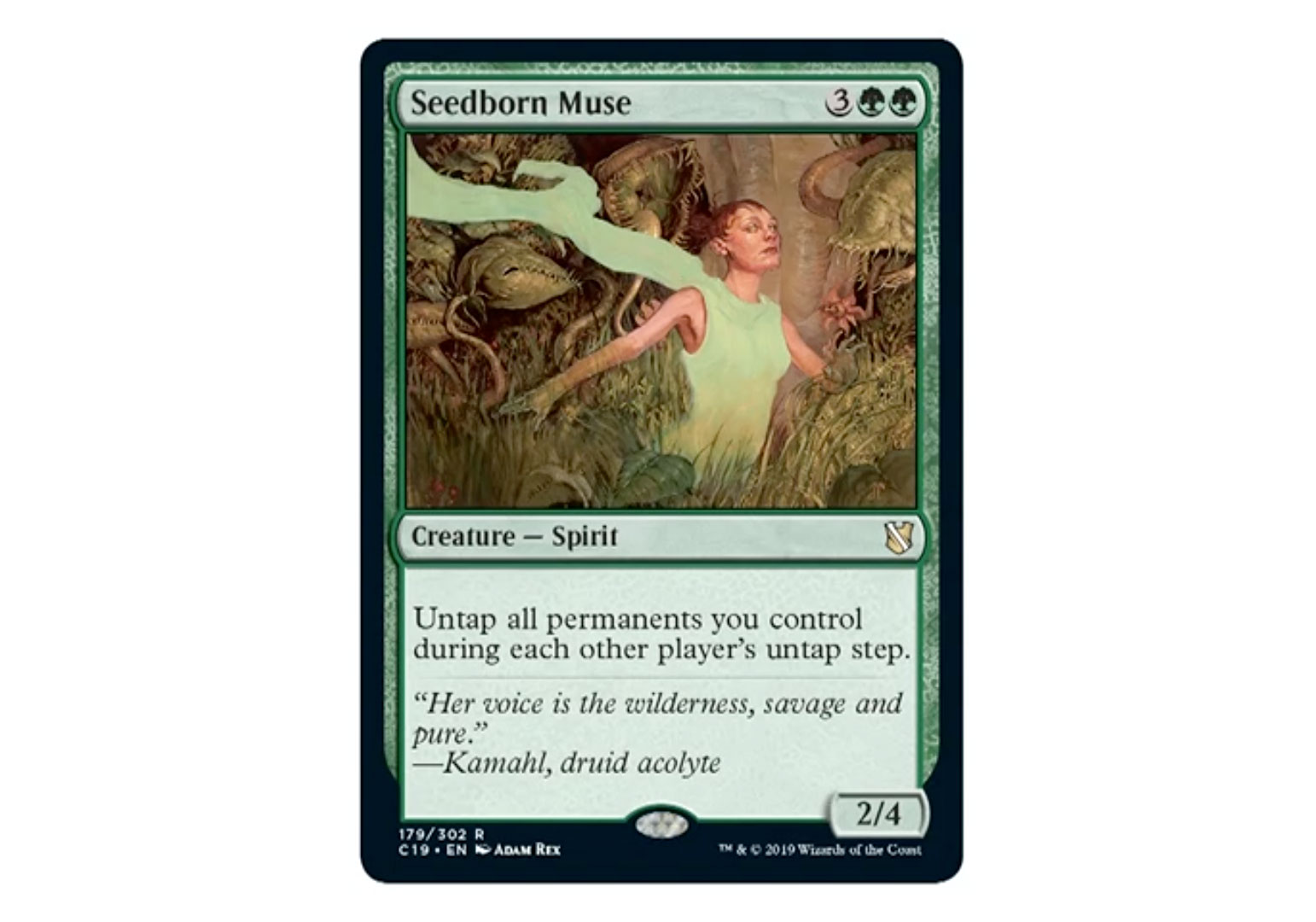 Seedborn Muse was revealed to be getting a reprint in Commander 2019 and, though Wizards did not reveal which deck it would be in, it will likely be included in the Morph deck. Seedborn Muse has an extremely powerful ability, which allows you to spend your mana on Morphs during your turn and then spend that mana again to unmorph your creatures on your opponent’s turns. Prophet of Kruphix has a similar untap ability, but when combined with the Prophet’s “You may cast creature spells as though they had flash” ability, the card was too good and was banned from Commander. 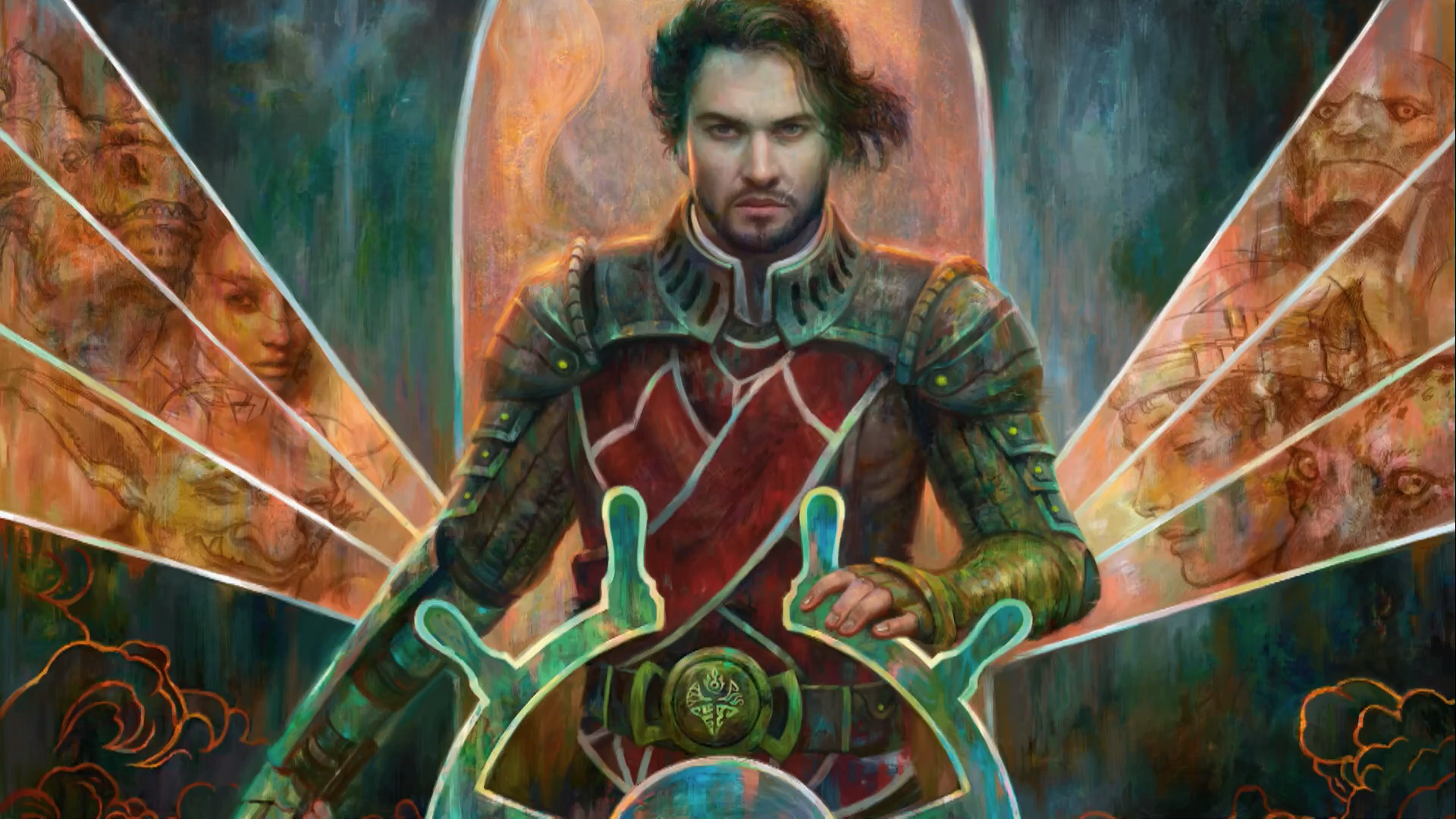 The Commander 2019 Design panel ended with quite the tease—artwork for a card in Commander 2019 featuring Gerrard Capashen, the captain of the Weatherlight during the Weatherlight Saga, the story arc dominated Magic’s story from Weatherlight (1997) to Apocalypse (2001). Apparently the card that goes with this art will be revealed later this weekend at another Magic panel at Gen Con.