A Book Providing the Flavor of Acq. Inc within the Forgotten Realms 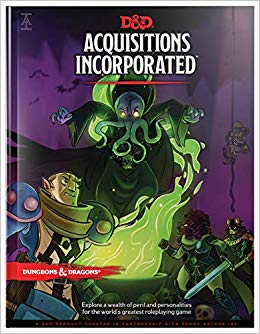 No, it’s not a joke; Wizards will be publishing a book in collaboration with Penny Arcade.

“To tons of people around the world, the flavor of D&D played by the Acquisitions Incorporated crew was their first taste of just how much fun a Dungeons & Dragons game could be,” said Nathan Stewart, Senior Director of Dungeons & Dragons at Wizards of the Coast. “We wanted to start experimenting with presenting different playstyles to fans entering the D&D community, and it made sense to start with a group who has spent ten years at a table with Chris Perkins entertaining hordes of fans.”

When you’re just starting out in the adventuring business, it might be nice to have a leg up. It can be a big help to have access to the powerful artifacts, expertise, and jobs that Acquisitions Incorporated (Acq Inc) has to offer a new franchise. Join Omin Dran, Jim Darkmagic, and Viari like never before with the new Acquisitions Incorporated campaign book for Dungeons & Dragons!

Set yourself up for success when pursuing your own fantasy-business endeavors, using all the ingredients you need to include Acquisitions Incorporated in your D&D campaign, to establish your own franchise, and take on specialized roles therein. Plus, there are always openings coming available… Just try not to think about why.

You can pre-order above. As always, if you pre-pay you’ll get double points on featured pre-orders. If you’d rather reserve and pay for it when it’s release, you can do so above, by email at sales@justgamesroc.com, by phone at 585-586-0586 or by stopping by the store!