“The Grand Star Alliance is happy to accept the best and brightest from any world.”

One year ago, KeyForge introduced the world to a new kind of game, one where every deck is one-of-a-kind and where anyone has the chance to become a champion. Richard Garfield’s imaginative design welcomed players to the endlessly diverse world of the Crucible, where they stepped into the role of mighty Archons leading teams from three of the planet’s great houses in tactical competitions of wits and wills. Victory means the chance to unlock ultimate knowledge and power, and the chance to ascend beyond this plane to discover what waits beyond the world you know.

In both Call of the Archons and Age of Ascension, you have had the chance to explore seven distinct Houses of the Crucible, learning their key characteristics, playstyles, and ways they interact with other Houses to discover synergy within each unique Archon Deck. But just when you thought you knew the Crucible, the clever Architects have altered its make-up once again. Now, two new Houses join the fray and the world will never be the same. 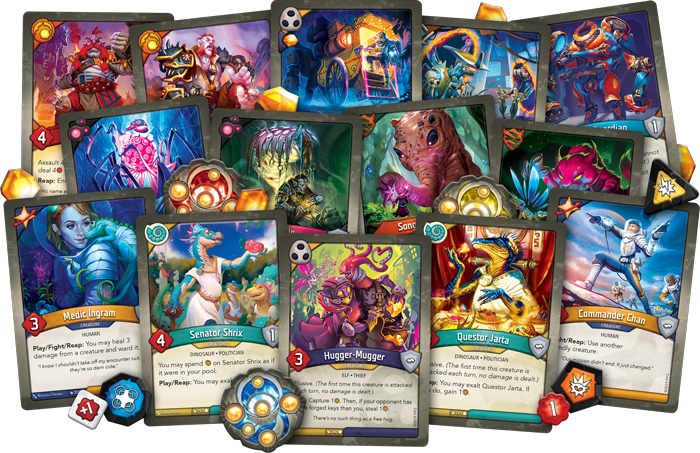 Discover a new side of the Crucible in Worlds Collide! As with other sets of KeyForge, Worlds Collide is a companion to Call of the Archons and Age of Ascension, not a replacement or a sequel. You do not need to start with Call of the Archons in order to reach Worlds Collide, and Archon Decks from each set are equally matched, so you do not need to switch to Worlds Collide Archon Decks in order to remain competitive. Rather, you are invited to continue your exploration of the planet with a cardpool of 405 cards, mixing in cards from each of the other KeyForge sets and introducing two brand new Houses!

Worlds Collide rotates out Mars and Sanctum to make way for the Saurian Republic and the Grand Star Alliance, but that does not mean that they are gone for good. The Crucible is ever-changing and evolving, and these beloved Houses will have the chance to return in future sets of the game!

As an empire that is millions of years old, the Saurian Republic is possibly the oldest coherent culture on the Crucible. Although it has risen and fallen many times in its long history, the Saurians have survived and thrived over epochs. Under the lead of the wise Sauras Rex, first among equals in the Saurian Senate, they live side-by-side with the other peoples of the Crucible, a shining example to what the Hegemonic political party calls “lesser beings.” Some argue that the Republic is in decline, but others say simply that it has outgrown its expansionistic, warmongering days.

The Tribes of the Saurian Republic trace their lineage back to dinosaurs placed on the Crucible some sixty-five million years ago. Although there’s substantial variation both between and within the tribes, Saurians tend to be large and physically imposing creatures that even the giants of Brobnar would think twice before fighting! But more than that, the Saurians pride themselves on their philosophical debates led by brilliant minds like thePhilophosaurus (Worlds Collide, 207) and technology so advanced that lesser civilizations mistake it for magic. 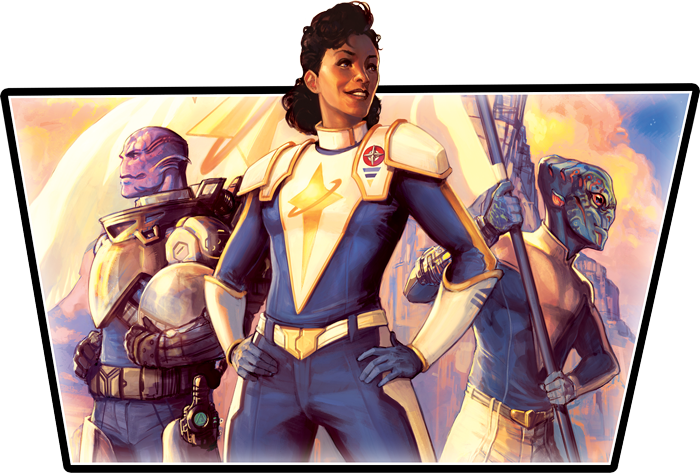 Standing opposite the long-established Saurian Republic is perhaps the newest arrival of the Crucible, the Grand Star Alliance. On their continuing mission of exploration, the crew of the SAV Quantum found themselves falling through an anomalous energy field and crash-landing on the Crucible. Despite this setback, the scientists, explorers, and small military contingent of the Grand Star Alliance remain dedicated to their mission, boldly going where no man, woman, neuter, or other-gendered-being have gone before!

The Star Alliance has spent decades exploring the galaxy, bringing dozens of star-systems into the peaceful and democratic Alliance. Since their crash, the Alliance crew have built a small city where their polyglot, multi-species community from dozens of star systems have managed to survive. Their crew brought with them advanced technology, including sophisticated computers, jet packs, ray guns, and the omni-present wrist modules that links each crew member back to the Quantum’s central computer. For their part, Captain Val Jericho (Worlds Collide, 326) and her crew are happy to enlist native guides as they set out to unlock the mysteries of the universe! 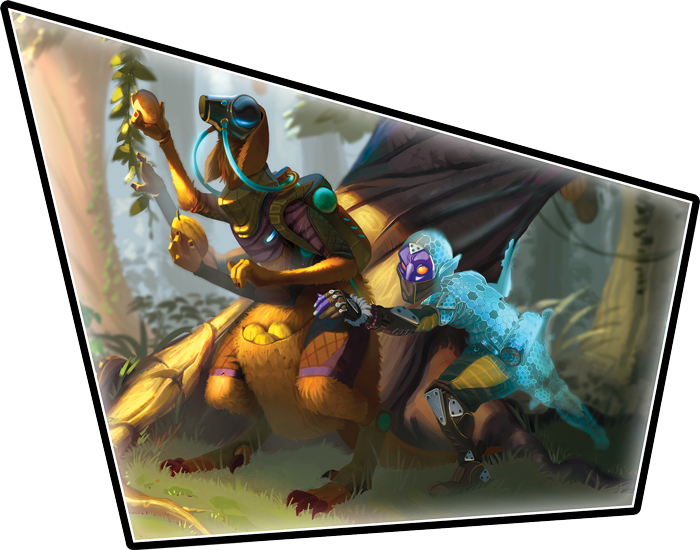 In addition to these two thrilling new Houses that join the fight for the Crucible’s Vaults, Worlds Collide also continues to explore the world of KeyForge by introducing new mechanics that add more variety and synergetic possibility to the game. The first of these new concepts is warding. When a creature becomes warded, either through the use of technology like a Force Field (Worlds Collide, 310) or the skill of a creature like  The Feathered Shaman (Worlds Collide, 383), you simply place a ward status counter on it. Then when the creature would be damaged or leave play, you instead discard each ward counter on it and your creature lives to fight another day. A creature may only have a single ward counter on it at a time, allowing your opponent to land a second attack on a creature if they so choose, but this additional protection help tip the scales of power in your favor as the competition continues.

Opposing this more defensive mechanic, Worlds Collide also introduces the possibility of enraging a creature, which is also marked by a status counter. An enraged creature must be used to fight, if able, at which point the creature removes all enrage counters. Interestingly, different Houses take different approaches to this mechanic. Some, like Shadows, enrage their enemies with cards like Pestering Blow (Worlds Collide, 245) to distract them from reaping or using action abilities, while other like Brobnar may use it to strengthen their warriors with treasured artifacts like theIrestaff (Worlds Collide, 10). 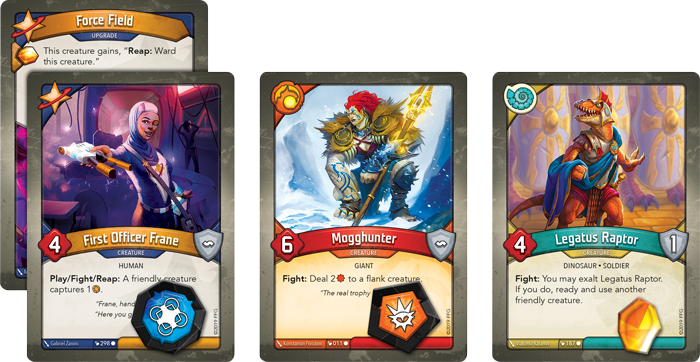 First Officer Frane is warded, Mogghunter is enraged, and Legatus Raptor is exhalted!

But while fighting is a key part of playing KeyForge, the most important part of the game is the æmber, and this new set adds a new way of bringing this precious into play by exalting creatures. When you exalt a creature, you place 1 æmber on it from the common supply. Just like captured æmber, if this creature then leaves play, the æmber is added in your opponent’s pool. While this may seem a foolish risk at first, cards with exalt, such as Paraguardian(Worlds Collide, 206) often offer powerful benefits if you choose to do so, introducing a greater element of pressing your luck to your games. Is the ability worth the risk? Only you can decide. 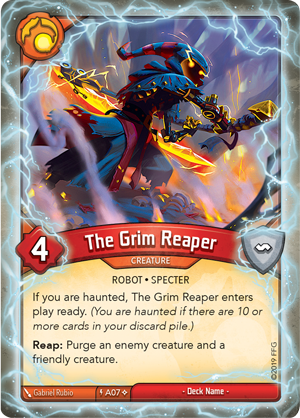 But more than new Houses and mechanics, Worlds Collide offers players something that has never been seen on this wondrous planet before. On the weird world of the Crucible, anything can and does happen. As the strange energy of the planet’s Æmber flows, glimpses of possible futures can burst into existence. These incredibly rare occurrences are known as Anomalies, and they can manifest in any House. For example, The Grim Reaper (Worlds Collide, A07) destroys without concern for loyalty to any House or Archon with its terrifying ability to purge both an enemy and a friendly creature each time it reaps. Beyond this, the robotic specter may also enter play ready if you are already haunted by the destruction of your team, possessing at least ten cards in your discard pile. You never know when or where these anomalies may appear. All you can do is expand what you know to be possible and embrace the infinite potential before you!

Along with this new set of KeyForge comes a wide variety of ways for you to jump into the game. In addition to the individual KeyForge: Worlds Collide Archon Decks, this set also offers the KeyForge: Worlds Collide Two-Player Starter Set, which provides you with all the tools you need to either begin or expand your adventures on the Crucible, including two unique Worlds Collide Archon Decks, a Quickstart Rulebook, two poster playmats, and all the keys, tokens, and chain trackers two players need to start playing. 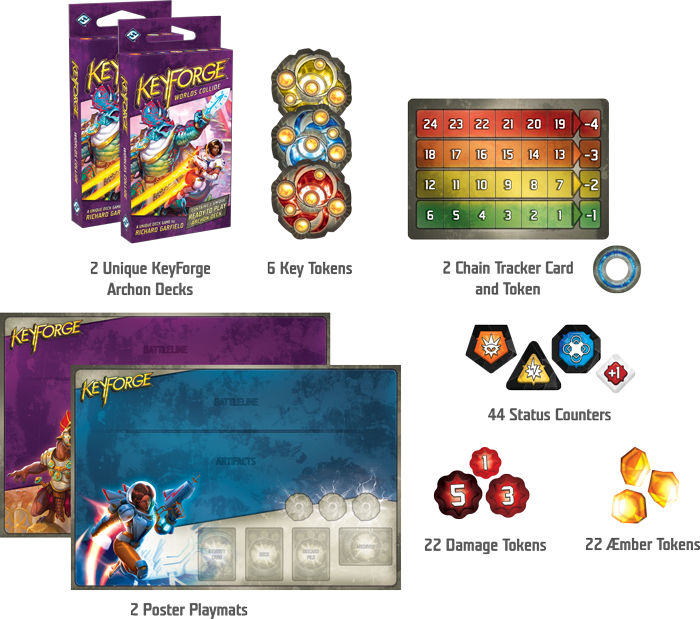 Everything found in the KeyForge: Worlds Collide Two-Player Starter Set.

However, if you’re discovering the Crucible on your own, jumping in on the go, or just looking for some extra tokens, you will now be able to pick up the KeyForge: Worlds Collide Deluxe Archon Deck. This deluxe deck is the perfect first step into the world’s first Unique Deck Game. This box provides you with all the tools one player needs to either begin or expand their adventures on the Crucible, including one unique Worlds Collide Archon Deck, a Quickstart Rulebook, a chain tracker, three keys, and all the tokens required to begin your cosmic clashes! 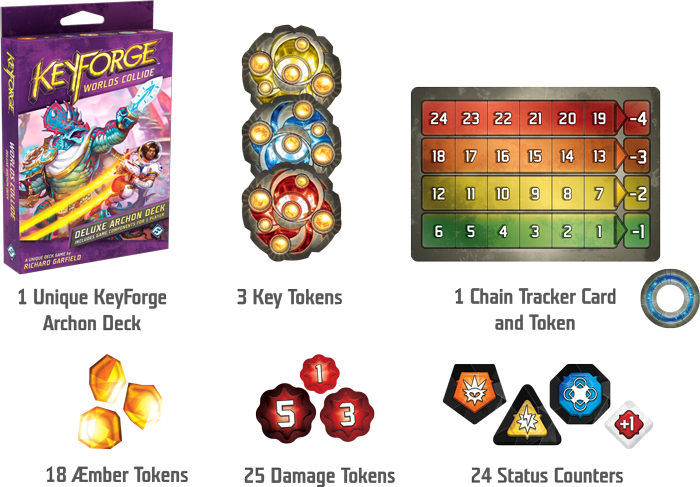 Everything found in the KeyForge: Worlds Collide Deluxe Archon Deck.

Then, for players who are ready to take their KeyForge game experience to the next level, there is the KeyForge: Worlds Collide Premium Box to keep your valued KeyForge components safe and organized. Complete with two unique Worlds Collide Archon Decks, five tuckboxes designed to hold sleeved decks, a new chain dial, a collection of tokens with box to house them, and a sticker sheet to help you display your pride for any of the nine KeyForge Houses, you’ll be ready to jump into the Crucible with style! 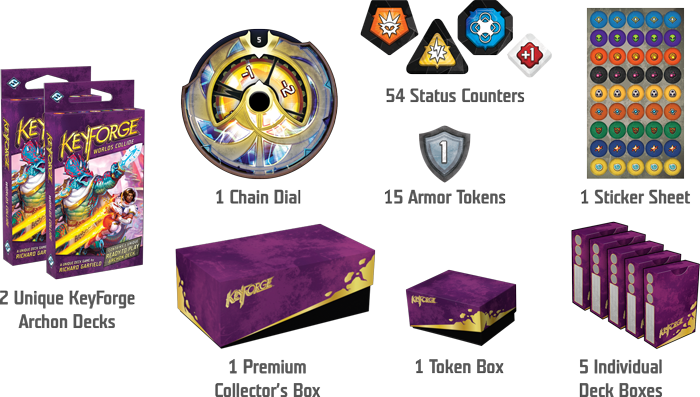 Everything found in the KeyForge: Worlds Collide Premium Box

Once you have decided which option is right for you, you will be ready to take on the renewed world of the Crucible when Worlds Collide lands at retailers in the fourth quarter of 2019. At this time, you will continue to be able to track your Archon Decks from every KeyForge set in the Master Vault at KeyForgeGame.com. Here, you can record your decks, track their performance at events, follow the progress of other Archons across the globe, and stay updated on tournaments and event news from the Fantasy Flight Games Organized Play team. As KeyForge continues to evolve, so too will the Master Vault. Be sure to keep updated so you can engage with the community and see what surprises the Architects have in store!