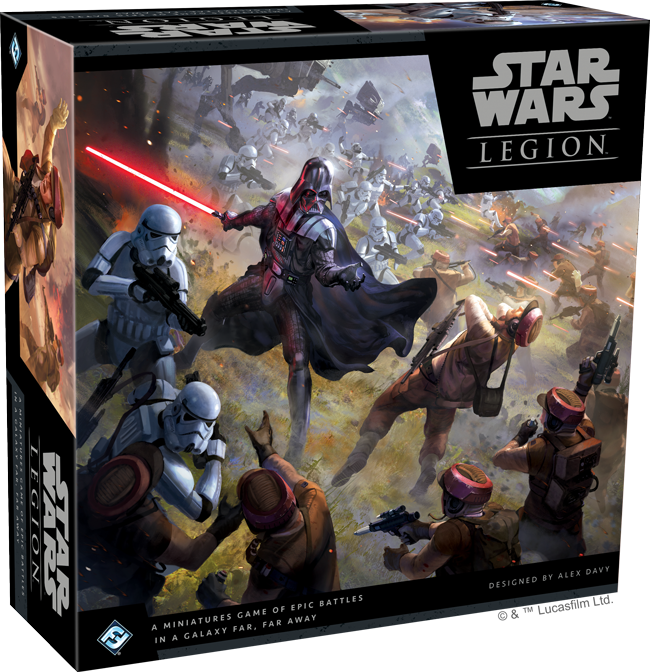 Pre-order for Star Wars Legion are now open! Organized play has been announced, and what’s more, the details of the launch event are now available and we are targeting March 24 for a day of Star Wars Legion fun! Scroll down to mash the pre-order button, or read on for some insider details on things to come.

“General! Prepare your troops for a surface attack.”
–Darth Vader, Star Wars: The Empire Strikes Back

Warfare is an inescapable part of the Star Wars universe, from the blow dealt to the Rebel Alliance in the Battle of Hoth to a few Rebel strike teams taking on a legion of stormtroopers stationed on Endor. Seize your chance to get your boots on the ground and lead your troops to victory with Star Wars™: Legion, a miniatures game of thrilling infantry battles in the Star Wars universe!

Star Wars: Legion invites you to join the unsung battles of the Galactic Civil War as the commander of a unique army filled with troopers, powerful ground or repulsor vehicles, and iconic characters like Darth Vader or Luke Skywalker. While innovative mechanics simulate the fog of war and the chaos of battle, the unpainted, easily assembled miniatures give you a canvas to create the Star Wars army you’ve always wanted to lead into battle—whether you fight for the monolithic, oppressive Galactic Empire or the ragtag Rebel Alliance.

From the owner, Matt, via conversations with Fantasy Flight’s team. Details in this dialogue are direct transcriptions from conversations at conventions and over the phone. This is as close to the insider scoop as you’re going to get.

The expansions that “duplicate” sculpts in the core set will contain different upgrade cards. However, upgrade cards will not be sold cross faction (Rebels, no need to buy Imperial boxes). Like many games, 2 core sets may be your best value if you’re planning on 2 player home games. If you’re after more of a tournament build, you can likely stick to 1 core and pick up some expansions.

By the way, there are some bonus items and activities available – posters, post cards, early demo games, and so on, available to stores if pre-orders hit certain thresholds. These are 100% free to you, if you attend the release event. The release event is also free, if you buy a core set from Just Games. That release event again, is on March 24.

Organized play will commence in April with kits intended for “4 games” – meaning 1 game a week for a month, or 4 games over one long afternoon. Most kits will have an entry of $5 or so to play in the league.

New releases will come out monthly, for the foreseeable future, but not every release will be viable for every build, so there will likely be some ability to pick and choose your items. We will add this game to our subscription service at launch, so if you want 1 of everything, you’ll be able to get the typical double points for subscribing deal.

Legion is now available for pre-order. If you pre-pay for it, you’ll get double points. If you just want to reserve a core box or two, but would prefer to pay when it arrives, you can email sales@justgamesroc.com and we’ll set you up. It’s a PayPal shopping cart, so you can add an item, then come back here and add more items if you like.