Join us for a three part event as we play Magic: the Gathering to win the “Giant Oath” cards produced as a promotion by Wizards of the Coast in 2016. This event is played in 3 parts, first choose Standard or Modern, and then if you are in the top 4 of that event, you will draft to win the Oaths! At the lowest possible attendance to fire a sanctioned event (that’s 8 people, folks) there will be around $1000 of prizes in this event series, many of which you don’t need to Top 4 to win!

NOON REGISTRATION
12:30 Pairings for part 1, Modern OR Standard
Choose your format, and battle for the Oath of your choice! The top 4 in each event after Swiss rounds will win the right to Draft Aether Revolt and battle for the cards!
– Prizes: everyone who plays will get 2 packs of Aether Revolt, garaunteed. Additional packs and store credit will be awarded based on attendance. Some samples prize brackets are given below.
– Participation: The first 24 players to register or pre-register and attend will recieve 1 Foil Thopter / Servo Token (Current value = $20), pictures below.

5 PM* TOP 8 DRAFT
The top 4 players from the Standard and Modern Tournaments will draft Aether Revolt in a single-elimination draft, receiving 1 pack per match win. Should they achieve

*Time subject to change based on the end of Swiss rounds for both Modern and Standard tournaments.

PRIZES
Everyone who plays Modern or Standard will receive 2 packs of Aether Revolt or a Standard set of their choice. In addition, here are sample prizes 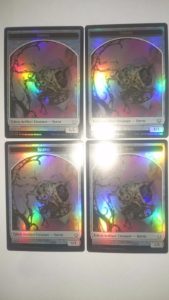