D&D Adventure Begins is a pared down and streamlined version of some of the best parts of a D&D campaign into a board game that can be played rather quickly, or drawn out for extra roll playing fun and rewards. Up to four players can take on the dungeons laid out before the Adventuring Party, facing zany scenario cards and threatening monster cards. Players can use a mixture of their Weapons, Abilities, Special Abilities, and Item cards to overcome the perils they encounter, using only a simple D20 roll for turn order and attacks. 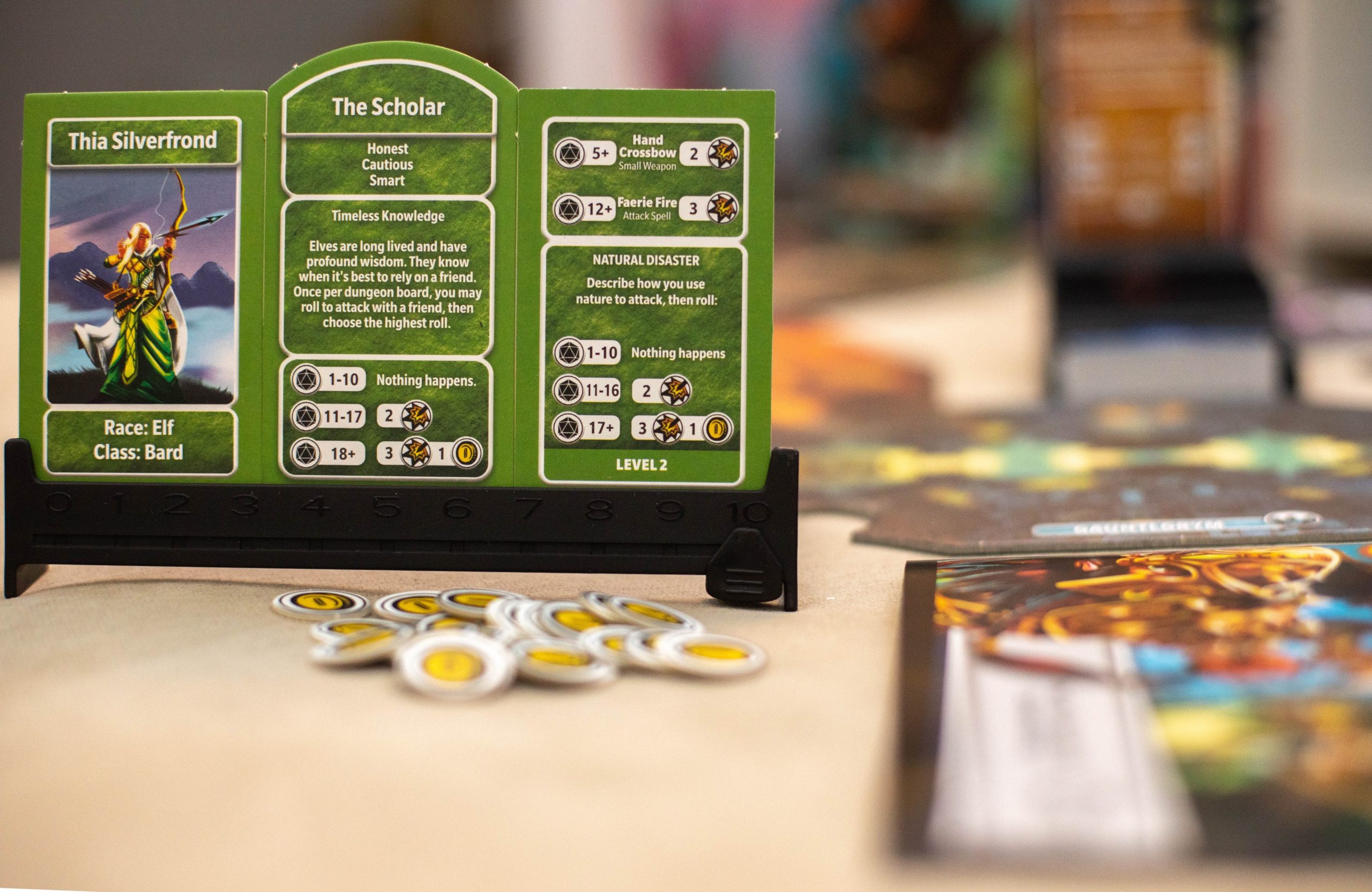 See below for a bit more detail on game play, and how we managed our way through the four dungeon tiles on our way to The Kraken!

Each player chooses one side of a hero card, one side of a personality card, and sets their combat tile to ‘Level 1.’ They each then choose a Backpack card.

Each player chooses a backpack item that will enhance their experience in some way.  We chose the ‘Scholar’s Backpack’ and the ‘Explorer’s Backpack.’ See photo for more info on these.
Adventure Cards: Primary role of the DM for the turn is reading what the Adventure card for the turn is. It can be a monster or a scenario.

Monsters have their own battle cards, visible only to the DM for the turn. (A player can be both in combat, and the DM. They’ll just have to roll for both roles.) Once defeated, each monster awards different things at the end of each combat. 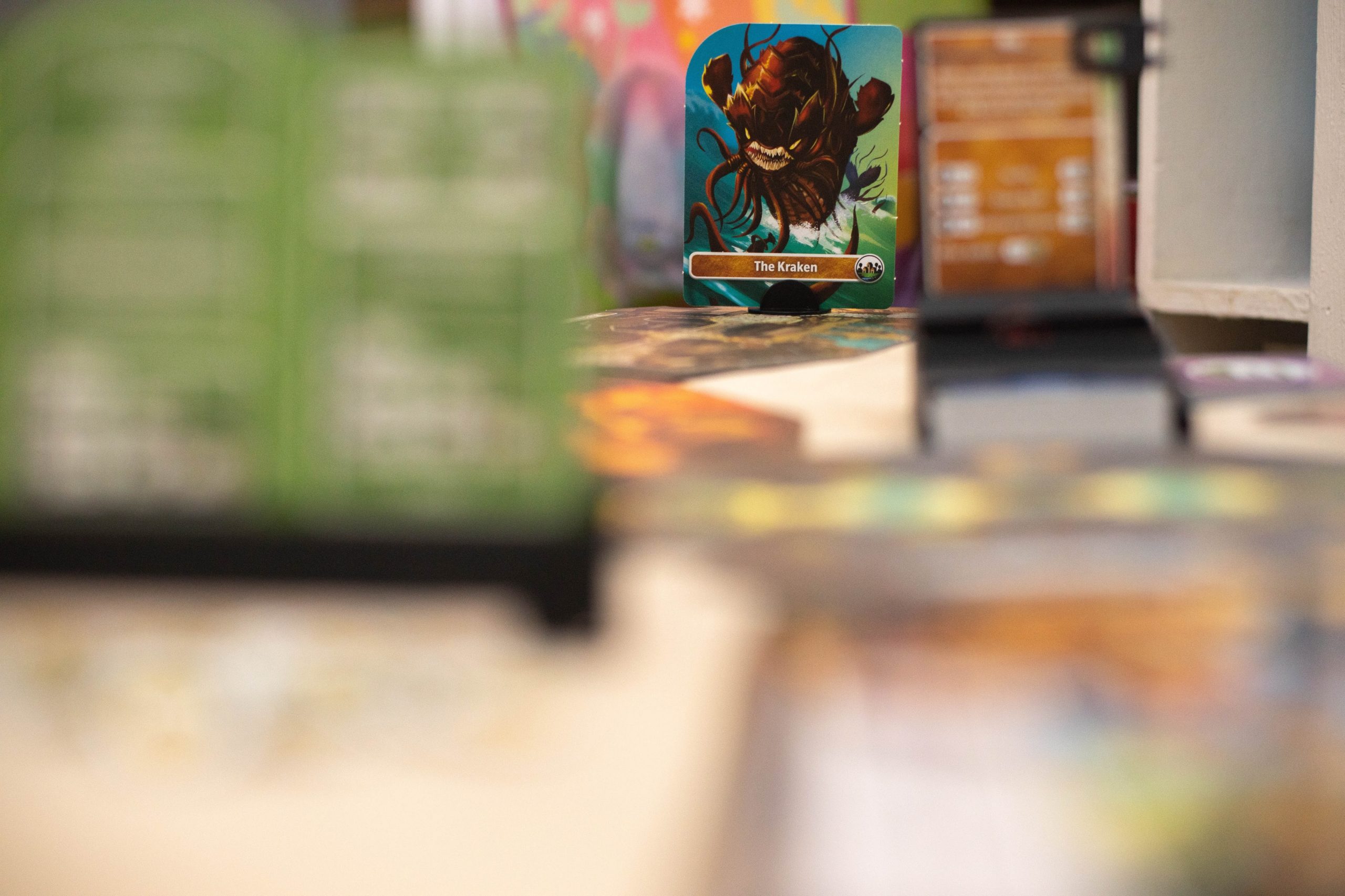 Scenarios can range from encounters where the party will have to vote on an outcome with either positive or negative outcomes based on their rolls. Some scenarios are silly like “Drop Some Mad Libs” – a Monty Python inspired story card where you must fill the blanks in “Your mother was a _____, and you father smelled of _____!” The DM chooses who had the most impressive insult and awards +1 Gold. Don’t fret, the entire deck is not full of Monty Python references, this one just did it for me personally!

Each player, when not in combat, can use either 3 gold to buy an item card OR wait until they have 5 gold and level up. Leveling up allows you to switch that rightmost card from Level 1 to Level 2.  This will increase your damage dealt in combat and can often add abilities that stun the monster you are facing.

The final Boss of each dungeon tile. Each combat goes back and forth: Player > Monster, next Player > Monster. Turns are passed in a clockwise fashion.  This goes for any combat, not just Gatekeepers.

If a hero drops to 0 or below HP, they die. They may turn in all of their gold to revive with 5 HP and continue playing. Any other player may donate 1 gold to help revive their fallen teammate.

Our final battle with the Kraken came right down to the wire. Thia died while fighting valiantly with many Lightning spells, even after Ris’ healing spell (which of course we saved for the Boss fight)! Ris delivered the final blow at just 2 HP with a valiant mace attack that struck the now weakened and electrocuted Kraken square in the face, cracking its carapace in two!