Due to COVID-19, Wizards has pushed back the full global launch of Commander Legends to November 20, 2020.

This will include all products: Draft Boosters, Collector Boosters, and Commander Decks. Prereleases will occur starting November 13, 2020. Promos will have the previous date printed on them.

Join us for the online Commander Legends Prerelease on November 14 at noon! Participating in this event will get you:

As with all 2020 releases, this product is subject to delays or other issues based on COVID-19.

All additional products are also available, in limited quantities, for the release date of November 20.

I cannot overstate how excited how I am to finally be able to talk about this set with all of you.

By the time it releases, it will have been nearly six years since I originally came up with the idea. Think about what you were doing six years ago! It has been a long time coming for this one.

Concepted, architected, and vision designed by me, then handed off to Jules Robins for the final set design (with some great initial architecture from Mark Globus along the way, too), this set is really a love letter to Commander . . . and really, just some of the awesome characters in Magic‘s history.

Before getting into cards and the Draft format, there are three big things about the set which are important to set context for early.

Okay. Now with that all said, let’s get into how it works!

In Commander Legends, you’ll be drafting three 20-card booster packs. Yes, 20 cards! Each pack will have two legends in it—there are two dedicated legend slots, in fact! (Oh, and every pack has a foil too.) Our favorite way to play is to draft at a table of eight and split into two games, but you can also draft as a number smaller than eight and play one game, too! 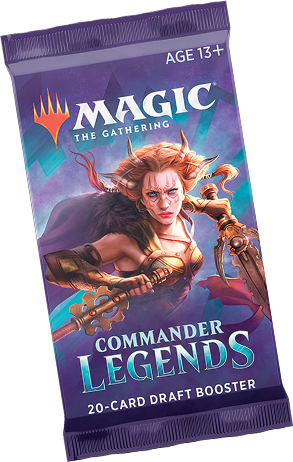 So, you’ll crack open your first pack, like a normal draft. But there’s one big wrinkle to drafting here: for every pick of Commander Legends, you’ll be taking two cards at a time! Like the Two-Headed Giant Draft in Battlebond, or the first pick of Double Masters, you will snag two cards at once for every pick.

Why? Well, there are a few reasons. The first is that part of the fun in Commander is finding cool synergies between cards—and this lets you look through all 20 of these cards and grab two synergistic cards together. Second, it makes the draft go a little bit faster—with 20 cards per pack, it was taking a while, and this sped up the drafting process. Third . . . well, we’ll get there in a second. Hold on.

Otherwise, drafting proceeds pretty much as normal. (But with more cards!)

After the draft, you will need to build a 60-card deck—much like how a traditional deck of Magic is 60 cards and a traditional draft is 40, here it’s 60 to Commander’s 100.

Your deck will need a Commander that locks in its color identity for deck building, your life total is 40, and there’s Commander damage, and all additional Commander rules are still in play . . . with one exception.

You can play more than one copy of a card if you draft it: the Singleton rule does not apply. We increased the number of commons in the set from normal to help mitigate how often this comes up, but it can happen. It also stops you from making Draft picks you feel sad about later: “I took a second copy of this card on accident. Whoops!” It’s a nice quality-of-life rule, and because you’re drafting, don’t worry, there’s still tons of variety in your decks.

Now, there was a big challenge during the initial design of the set. People were drafting, but they would pick a legend early and get locked into those colors. Because you needed to find the right color combination, the odds of you hitting the correct two- or three-color legend in a future pack to even play the colors you were drafting weren’t high enough for you to speculate that you might find it.

Then the team and I uncovered the glue that would hold the whole thing together. The element that made drafting work.

Are you ready for it?

It was PERFECT. You could draft a red partner and still easily find a monocolor partner of a different color to pivot into—while keeping your red color alive. This is pretty similar to a normal draft, where you will start off drafting a color and then look for another color to be open. It played great! (This is another reason, by the way, that picking two cards per pack is awesome: you can grab two partners at the same time!)

Plus, you have all asked for monocolor partners since the mechanic originally appeared in Commander 2016—so this was also a perfect opportunity to deliver on something I’ve been asked for so many times.

Here it is folks. Your first preview card: a new Baron Sengir with partner. Let’s see it! 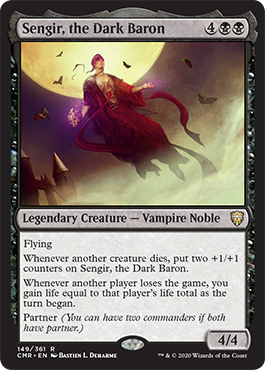 Looking pretty good, buddy! This thing grows big quick—slam it down on your board, pass the turn, and it can pretty easily grow to kill somebody in a single shot . . . or perhaps a more sinister person would play it in a sacrifice deck, cast it with food at the ready, have Lightning Greaves, and kill somebody out of nowhere.

It also conveniently gets huge so your opponents will want to attack other people. Which then eventually triggers its second ability—excellent!

Why does it have partner? Well, not every partner in this set intends to do nice things with their buddy. Thanks to the dies change, your Commander triggers dies effects when it perishes. This is a card that particularly loves partners who die. There’s a few I have in mind . . . but we’ll have to save those for closer to the set release.

Also, just because this set doesn’t have a hodgepodge of mechanics from across history doesn’t mean we didn’t make plenty of great mechanical references too. The two +1/+1 counters here is a reference to Baron Sengir’s +2/+2 counters.

And speaking of the old Sengir, artist Pete Venters is an iconic part of Baron Sengir’s look. He drew the original character, and it was a great opportunity to bring him in on the fun, too.

So, a special promo card you’ll be able to get at a Commander Legends preview event (sort of like a Prerelease; more information on those closer to the date) is this alternate-art Sengir, the Dark Baron! 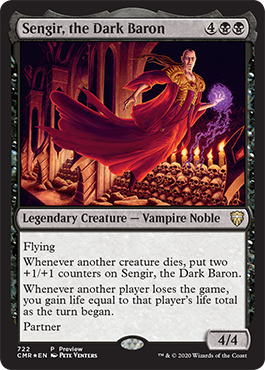 I am so happy we got to do this—and when I said this set was a love letter to longtime Magic fans, there is a lot like this here for you.

But it’s not all about the Baron. There are tons of other legends in the set—and many at uncommon too.

The Baron had an old card—and Commander Legends not only gives new cards to old characters, and introduces some brand-new characters, too, but also finally gives some beloved characters cards.

When we first fleshed out these two characters in the Magic story “Under the Silver Moon,” they quickly became fan-favorites. Their plucky story and their wonderful relationship are things I had long wanted to get into cards as actual characters. They’ve been on my legend list for a while.

And now, they’re finally both here. I give you the renowned tracker and trapper duo of Innistrad: Halana and Alena! 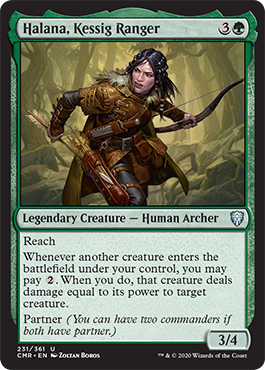 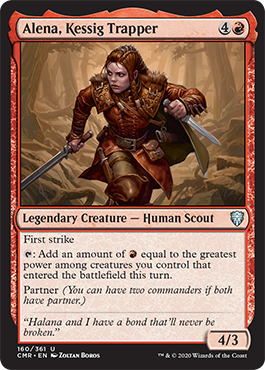 Unlike the Baron, who really loves when his associates die, these two play much nicer together. We took some notes out of the “partner with” playbook and made some flavorful combinations that work great together.

Of course, unlike partner with, you can pair these up however you want! If you want to bring Halana and Baron together (he’d fit in well on Innistrad, I’m sure!) then go for it—and enjoy as you fight off your opponent’s creatures to grow the Baron.

Now I am going to tell you about what is probably the strangest card in the set—and has art fitting of its weirdness.

Whenever I was doing my early playtests and explaining how Commander Legends drafting worked, I would always, without fail, get the following question: “What if I don’t find a Commander I can play with?”

Now, in reality, this almost never happens. But I bet you were thinking it, too, when reading what is above. But still, we wanted a failsafe—both to make people feel comfortable and also to solve this in case it does ever happen to you.

So, check out this weirdo: 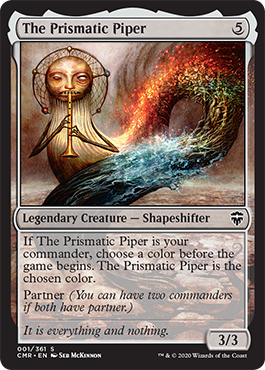 Aside from the incredible art (truly, Seb was the perfect artist for the task), what is going on here?

It’s like a basic land—you can think of The Prismatic Piper as essentially a “basic legend.” It’s always available to you in Draft. Draft Halana but don’t find a blue one for your green-blue deck? Don’t worry, you can play the Piper alongside Halana to make it work. Miss on your colors completely? Well, you can use two The Prismatic Pipers as your Commander!

But it’s nice to have it around. The Prismatic Piper shows up in about 1-in-6 packs, replacing a common, not replacing a legend. If you need one at the end of the draft (I will stress, this really doesn’t come up very often), you will definitely be able to find one among the cards at the table.

Those are all the partners I’m going to show off today—but I will say that the set has a whopping 41 brand-new partners, all of them monocolor. (Provided you include the Piper as a monocolor card.) A sizable part of why the set took so long to finish was really put all those partners through their paces given how many combinations there are. (And why we brought in Jimmy Wong and Josh Lee Kwai from the Command Zone, along with Sheldon Menery, Gavin Duggan, Scott Larabee, and Toby Elliott of the Commander Rules Committee to give us feedback and even try them out.)

And don’t worry: if partners aren’t your bag, we have plenty of new, non-partner two- and three-color legends in the set for you, too.

And of course, the set has more than just legends. There are plenty of cool and unique cards running around Commander Legends. One thing we wanted to try and use this set to do was help out strategies in the format that needed some assistance.

Yes, white in Commander has been the topic of much discussion over the past year or so. There are many tools for it coming out in future sets, and today I wanted to share one you can expect in Commander Legends as an example of this.

Prepare to ramp up in white! 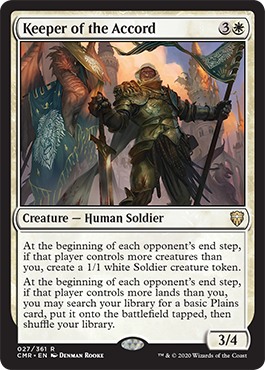 I know there has been a ton of discussion about if Verge Rangers and Cartographer’s Hawk are good enough—well, regardless of what you think of those, I can tell you Keeper of the Accord should get the job done. It’s pretty easy for this card to ramp you—actually ramp you!—multiple times, and then continue presenting ramp potential in future turns. The tokens are just the cherry on top.

I expect to slot this card into most of my white Commander decks, and you’ll be seeing a lot of it on tables.