A fantastic treasure trove is yours for the taking in this adventure for the world’s greatest roleplaying game.

Famed explorer Volothamp Geddarm needs you to complete a simple quest. Thus begins a mad romp through the wards of Waterdeep as you uncover a villainous plot involving some of the city’s most influential figures.

“Waterdeep Dragon Heist takes D&D back to civilization in an environment which encourages a lot of roleplaying,” Perkins said. “A lot of the inspiration was from things like Ocean’s Eleven and The Italian Job in a city environment. Where the goal of the adventure is to try and find a trove of treasure and keep it out of the hands of villains.” – Dungeons and Dragons’ lead story writer Chris Perkins

A grand urban caper awaits you, half adventure, half guide-book for how to run urban adventures for the DM. Pit your skill and bravado against villains the likes of which you’ve never faced before, and let the dragon hunt begin! 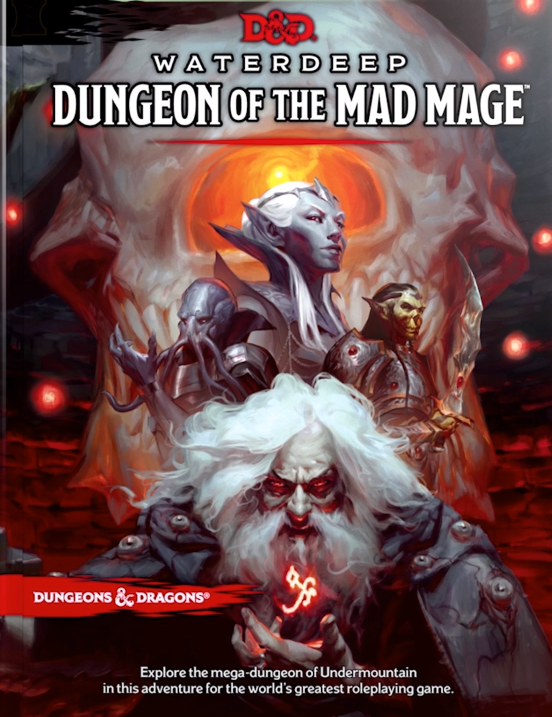 Dungeon of the Mad Mage

The Greatest Dungeon of Them All

Explore the mega-dungeon of Undermountain in this adventure for the world’s greatest roleplaying game.

In the city of Waterdeep rests a tavern called the Yawning Portal, named after the gaping pit in its common room. At the bottom of this crumbling shaft is a labyrinthine dungeon shunned by all but the most daring adventurers. Known as Undermountain, this dungeon is the domain of the mad wizard Halaster Blackcloak. Long has the Mad Mage dwelt in these forlorn depths, seeding his lair with monsters, traps, and mysteries—to what end is a constant source of speculation and concern.

This adventure picks up where Waterdeep: Dragon Heist leaves off, taking characters of 5th level or higher all the way to 20th level should they explore the entirety of Halaster’s home. Twenty-three levels of Undermountain are detailed herein, along with the subterranean refuge of Skullport. Treasures and secrets abound, but tread with care!

Pre-order below or reserve a copy at the store today!