“You need a teacher, I can show you the ways of the Force.”
–Kylo Ren, Star Wars: The Force Awakens

The Force is a mystery to many in the Star Wars galaxy. Empires have risen and fallen, yet the Force remains constant. Whether it’s the allure of the dark side or the path of the light, it flow through and connects every living thing in the galaxy. The most iconic Star Wars characters are guided by the Force, whether they believe in it or not, and the biggest battles and wars are truly an expression of the dramatic struggle between the light and the dark.

Just Games is proud to open pre-orders for Way of the Force, a new set of booster packs for Star Wars™: Destiny, now available for pre-order below. Pre-orders get double member reward points (roughly a 20% discount when used in participating discount programs).

Featuring 160 brand-new cards, Way of the Force revisits many of the saga’s most iconic characters in fresh new ways, focusing on their unique equipment, abilities, and tactics. The set includes the highest valued-die side to enter the game, a new way to bring back a defeated character, and a rare battlefield that comes complete with its own die. Furthermore, look for mechanics introduced in the newest base set, Legacies, to be expanded upon, such as the plot cards that can completely change how you play the game. 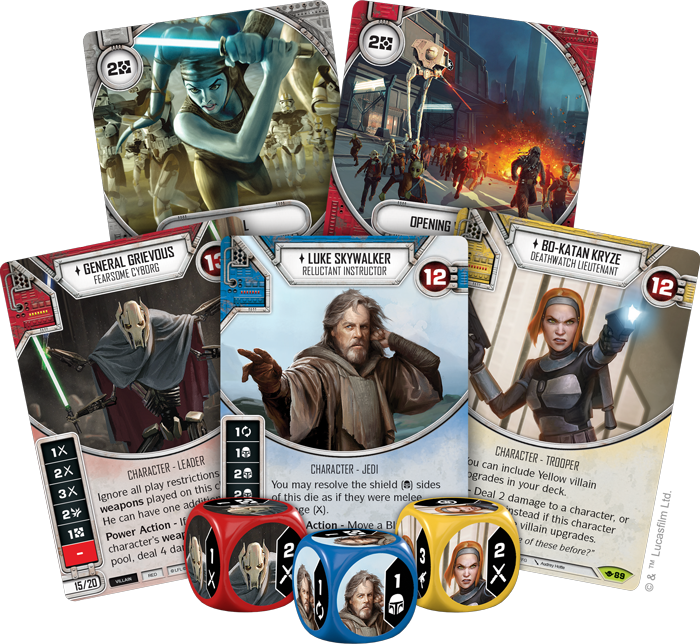 Way of the Force revisits many of the iconic characters of the Star Wars galaxy, giving a fresh take on their mechanics or returning to them at a later stage in their life. General Grievous  (Way of the Force, 21) falls into the former category. While his Awakenings version was known for stealing your opponent’s upgrades, the new version of General Grievous turns to this fearsome fighter’s mastery of combat. General Grievous ignores the play restriction of all weapons, allowing him to use the powerful suite of Blue-only lightsabers, and he can also be equipped with one additional upgrade, inviting you to take full advantage of Grievous’s extra limbs.

Equipping General Grievous with plenty of weapons is powerful enough, but if you manage to upgrade General Grievous to his full potential by having four of his weapon dice in your pool, you can simply deal four damage to a character as a Power Action. More than anything else, General Grievous is a character that determines your entire game plan in Star Wars: Destiny. To use him most effectively, you have a clear goal from the beginning of the game: to expand his collection and equip him with powerful weapons to synergize with his abilities. While it will take considerable time and resources to fully equip Grievous, you are rewarded with one of the most dangerous characters in Star Wars: Destiny. 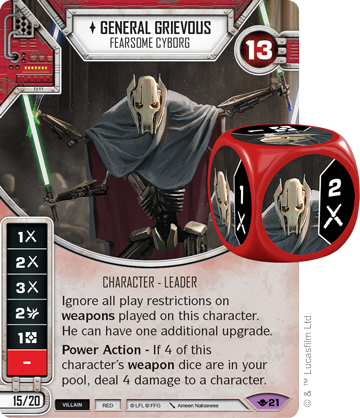 Few in the galaxy possess the military prowess and skill of the Mandalorians. During the time of the Clone Wars, Bo-Katan Kryze  (Way of the Force, 89) was a member of the Mandalorian group known as Deathwatch, a collection of Mandalorians who rejected the pacifist ways of Duchess Satine and looked to restore Mandalore’s violent, warrior history. Through growth and conflicts with the fearsome Maul, Bo-Katan found herself on the side of the light, refusing to bow to Palpatine when he ascended as Emperor.

Mandalorians are masters of combat and use all the tools necessary to achieve victory. Bo-Katan herself is no different, which is why she lets you include Yellow Villain upgrades in your deck, despite the fact that she is a Hero. Furthermore, her special symbol does additional damage whenever she has one of these Villain upgrades, encouraging you to fully take advantage of her unique tools. 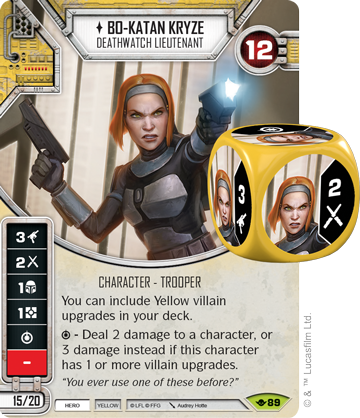 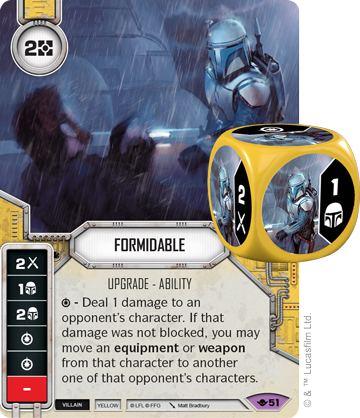 Way of the Force introduces plenty of new tools to include in Bo-Katan decks. Formidable  (Way of the Force, 51) is a new legendary upgrade that can not only damage your opponent, but disrupt their game plan in a whole new way. If its special symbol deals one unblocked damage, you may move a weapon or equipment from that character to another character an opponent controls. By splitting powerful equipment and weapons, you can seriously decrease the threat of high-damage characters like General Grievous.

Bo-Katan also synergizes well with Underhanded Tactics  (Way of the Force, 52). The modified ranged damage sides boost her already hard-hitting ranged damage, and chaining the special symbols on Underhanded Tactics and Bo-Katan lets you perform massive damage before resolving another die. Flashy turns like this can provide a huge boost in damage, well befitting a true Mandalorian fighter.

The way of the Force is mysterious. Jedi Master Luke Skywalker spent years contemplating the Force in his self-imposed exile at the first Jedi Temple on Ahch-To and he is still blind to many of its mysteries. Reluctantly, he is willing to pass on some of this knowledge.

Luke Skywalker, Reluctant Instructor  (Way of the Force, 56) is a master of offense and defense, able to resolve any of his three shield sides as if they were melee damage. Perhaps more importantly, as a Power Action he can pass on his knowledge, moving one of his Blue abilities to another Blue character. Constantly moving abilities like Force Speed  (Spirit of Rebellion, 55) can make it difficult for your opponent to focus on damaging just one character, and it allows you to adjust strategies in the middle of your game.

In addition to its iconic characters, Way of the Force follows up on the ideas first established in Legacies and expands on them. One of these expansions is the introduction of color-specific plot cards that can impact your gameplay strategies. Plots were introduced in Legacies and gave you some kind of advantage at the start of the game. Plots in Way of the Force expand on this idea and are relevant throughout the entire game. For example, Built to Last  (Way of the Force, 115) is a four-point Blue plot that synergizes well with Luke Skywalker. Giving all of your unique upgrades the Redeploy keyword ensures that no matter which character is defeated first, another will receive their most powerful upgrades. Furthermore, after you play a unique upgrade, you may exhaust Built to Last to gain a resource. As established, Way of the Force brings plenty of iconic weapons, abilities, and more to the battle, meaning there will be plenty of opportunities to play unique upgrades.

Way of the Force

The way of the Force influences the entire galaxy. Empires rise and fall with the ebb and flow of the Force, and behind every conflict there exists a war between the light and the dark. Let the Force guide you to your destiny.