Star Wars Destiny pre-orders are now open for the latest in the collectible dice game, Spark of Hope! Pre-order and get access to bundle deals and double points on all pre-paid pre-orders. Remember that you can also get a bonus discount by purchasing booster boxes in bundles of 3 – $99.99 per box and double reward points.

“We are the spark that’ll light the fire that’ll burn the First Order down.”
–Poe Dameron, Star Wars: The Last Jedi

Even in the darkest of times, the spark of hope can be found in the Star Wars galaxy, lit by those who dream of a better life. In the era of the Clone Wars, Jedi like Obi-Wan Kenobi fought against the darkness of the Separatist army. Later, charismatic leaders like Jyn Erso and Luke Skywalker led a tiny band of Rebels against a Galactic Empire, and when the First Order rose to power, the Resistance stood up as the spark of hope that would burn it down.

Fantasy Flight Games is proud to announce Spark of Hope, a 160-card set of booster packs for Star Wars™: Destiny!

Spark of Hope continues the themes introduced in Convergence, with an emphasis on subtypes, downgrades, and new plots that change the way you construct your deck! Look for Red villain cards that empty your opponent’s hand, a new set of moves and masteries for Blue heroes, powerful new bounty hunters bringing their skills to Yellow villains, and more! 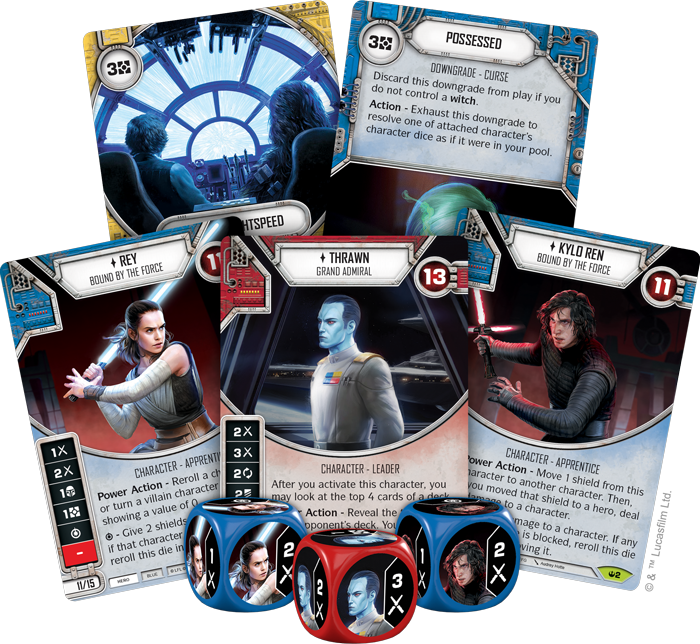 Few in the galaxy are as versed in the art of war as Thrawn  (Spark of Hope, 23). Always three steps ahead, the Grand Admiral enters every battle fully prepared for all of his opponent’s moves. Thrawn is a Red villain character who gets a view of the top four cards of your opponent’s deck every time he activates. This ability provides valuable information, especially for Thrawn’s Power Action, which allows you to use an event from the top four cards of your opponent’s deck as if it was in your hand. Not only will this deny your opponent an important event, it also lets you use their powerful abilities as your own. 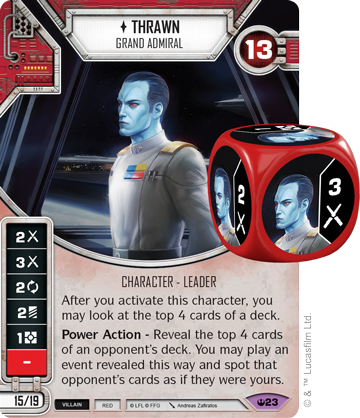 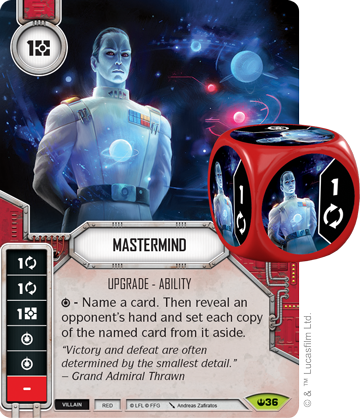 The information Thrawn provides can be invaluable to his plans. With the Mastermind (Spark of Hope, 36) upgrade, you can wait for your opponent to draw the revealed cards, then use Mastermind’s special to discard the most important one from their hand. Picking apart your opponent’s strategy and the vital pieces of their deck is powerful, and it is essential to Thrawn tearing apart his opponents, piece by piece.

While Cultural Records (Spark of Hope, 31) costs an extra resource over Mastermind, it also lets you remove your opponent’s cards while gaining a distinct advantage. By using Cultural Record’s special, you may remove a card from your opponent’s hand and then gain a resource or remove a die every time a copy of that card is played. Through gaining a deeper understanding of your opponent’s tactics and resources, you can turn their tools to your own advantage with Thrawn and his unique set of supports and upgrades.

Bound by the Force

Rey is not the scavenger she once was. Her connection to the Force has grown and the tutelage of Jedi Master Luke Skywalker has broadened her horizons and expanded her skills beyond her wildest expectations.

Rey, Bound by the Force’s (Spark of Hope, 57) special ability is one of the most defensive in the game, allowing you to give a character two shields, then rerolling Rey’s die if that character has three or more shields. With two melee damage sides, Rey can quickly go from providing cover to battling a foe. Furthermore, her Power Action lets you to reroll a character die, or turn a villain character die to a side with a value of zero, most likely a blank. This new version of Rey is undeniably versatile, helping you to mitigate your opponent’s dice, protect your characters, and defeat your opponent’s forces with melee damage. 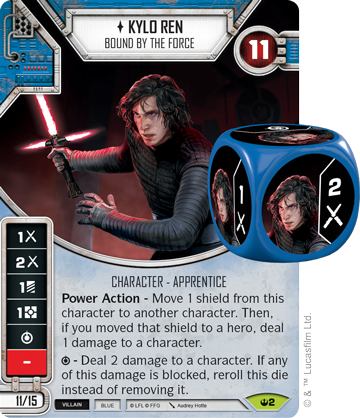 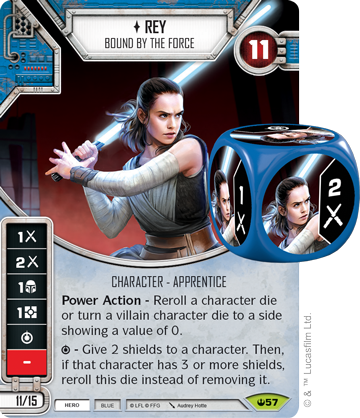 As Rey grows in power, so to does servant of the dark side Kylo Ren (Spark of Hope, 2). Kylo Ren mirrors Rey’s stats as an eleven or fifteen cost character with eleven health. His special symbol deals two damage to a character, and if any of it was blocked, you may reroll Kylo’s die into your pool. You can 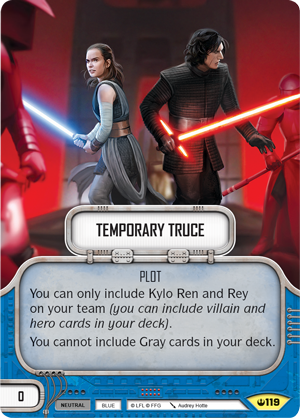 set up this interaction with Kylo’s Power Action, which moves one shield from him to another character, and then deals one damage to a character if the shield was put on a hero.

While Rey and Kylo Ren would synergize well on a team, their hero and villain affiliations prevent them from teaming up… unless aTemporary Truce (Spark of Hope, 119) can be established. This zero-point plot allows you to create a team exclusively with Rey and Kylo Ren, whose elite versions conveniently add up to exactly 30 points. Your deck can also include both hero and villain cards, but the young Force users will have to rely on Blue cards to achieve victory, since Gray cards cannot be included in your deck.

This team-up completely recontextualizes Rey’s Power Action, allowing her to turn Kylo’s die to its special symbol every turn. It is also greatly increases the value of Kylo’s Power Action, returning the shields Rey provides back to her and dealing damage to his enemies in the process. While they may use different sides of the Force, a temporary truce can form one of the most powerful teams in the galaxy.

Support of the Tribe 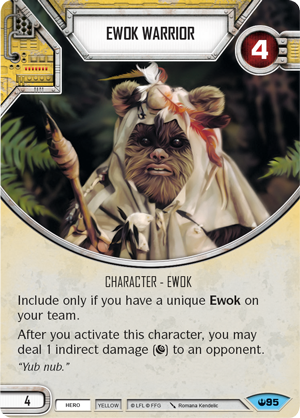 While Spark of Hope expands on the themes introduced in Convergence, it also introduces exciting new mechanics, including the game’s first diceless characters! These characters often have a small point cost, can still be attached with upgrades and downgrades, while also providing some kind of bonus when they are activated.

While individually these warriors may struggle, working as a tribe provides plenty of advantages. Chief Chirpa’s special ability is more damaging when you spot four Ewoks, and the indirect damage these warriors can pump out becomes intimidating as you activate more and more of them. Ewok Ambush (Spark of Hope, 101) lets you activate three of your Ewoks at once, potentially dealing three indirect damage to your opponent and giving you an additional action. Though the Ewok Warriors have no die, they can still be upgraded with weapons like the  Ewok Bow (Spark of Hope, 107), which can be transferred from character to character if used with a team of Ewoks. 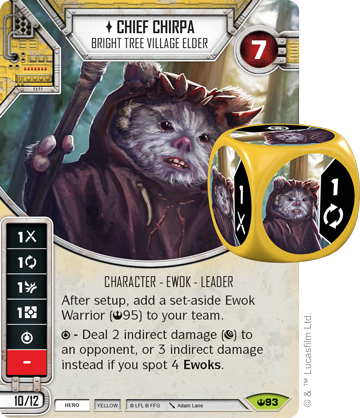 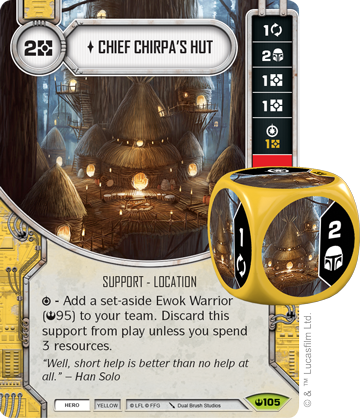 And while your initial team may not have much staying power with only four health each, Chief Chirpa’s Hut (Spark of Hope, 105) lets you use your resources to add additional Ewok Warriors to your team! The Ewoks may be underestimated, but with pure numbers can overwhelm their foes.

The spark of hope has been ignited throughout the galaxy. Will you extinguish it with Grand Admiral Thrawn, or use it to help fuel a Rebellion with Chief Chirpa and the Ewoks? Or will you find your own path with Rey and Kylo Ren? The choice is yours when Spark of Hope releases in the third quarter of 2019!