At first glance, it appears to be a descendant of the original 1979 game, with the design of the board being nearly identical and the inclusion of many of the original components. But this new game doesn’t appear to be an exact reprint.

Prepaid preorders receive double member reward points. All preorders are for local pickup, unless shop administration is contacted to make other arrangements at sales@justgamesroc.com

The original was an absolutely great game, but it wasn’t without flaws. It’s great a well-versed company like GF9 is tackling this one. We don’t know much about exact mechanics, but we’ve gotten a few images which hint at some very interesting gameplay. 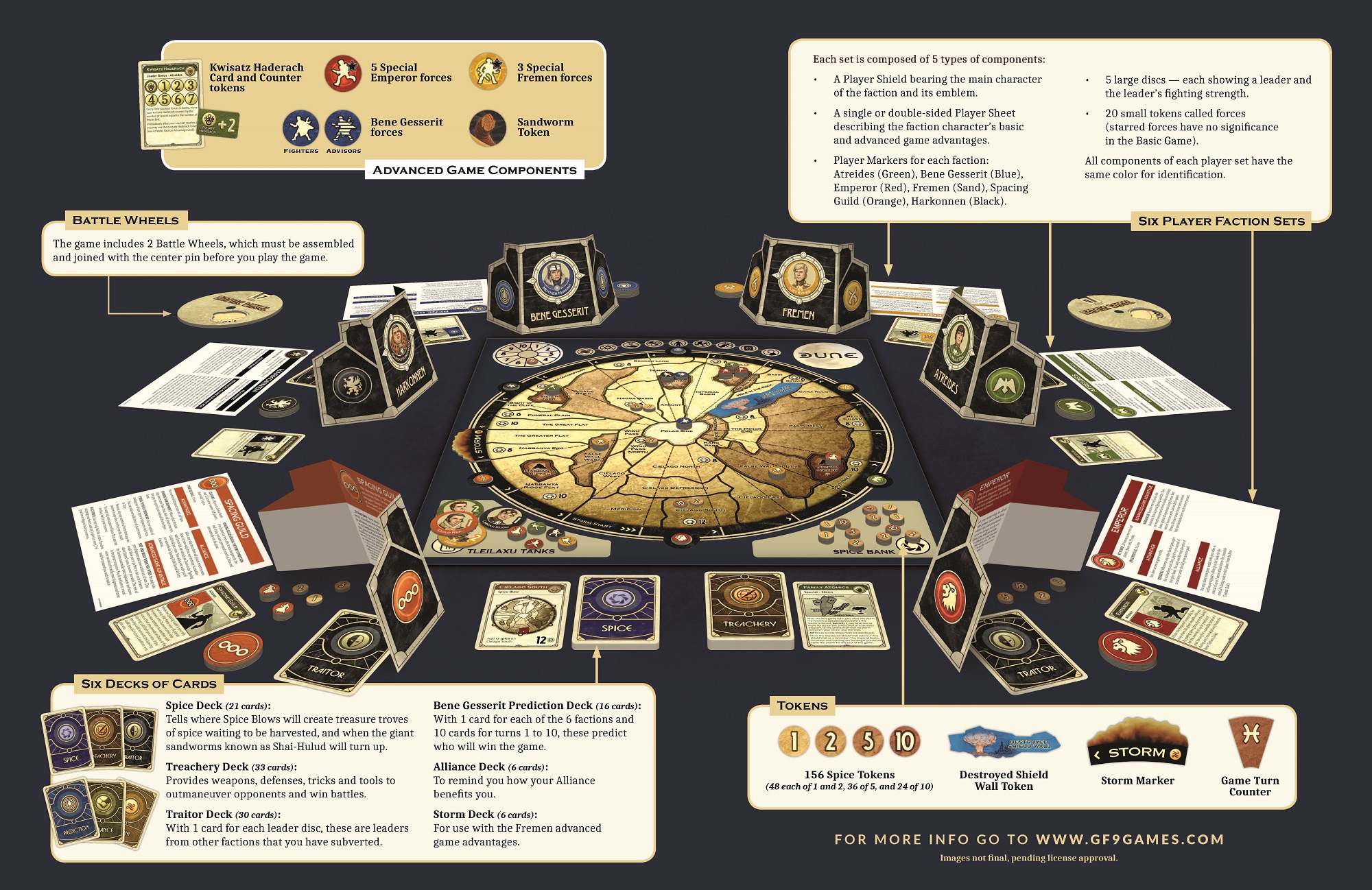 Player shields for hiding Traitor and Alliance cards, Battle Wheels, Sandworm tokens and more. Unique player factions make a very welcome return as well, although we don’t know much about how they will play just yet. But if you’ve read the tome, seen the epic or are eagerly awaiting the upcoming theatrical release, you probably already have a good idea of what each faction is capable of.

“Gale Force Nine has consistently demonstrated a skill and passion for building successful tabletop game series alongside category leading partners and we are thrilled to announce this exciting addition to the Dune licensing program ,” said Jamie Kampel, Vice President of Licensing & Partnerships for Legendary. “Legendary looks forward to a fun and meaningful contribution to this revered legacy property.”

The agreement calls for Gale Force Nine to produce original tabletop games drawing from the full scope of the Dune franchise—spanning the many publications from Frank Herbert, Brian Herbert, and Kevin J. Anderson—along with multiple direct tie-ins with Legendary’s highly-anticipated film from director Denis Villeneuve.

“This is only the beginning of our big plans in tabletop for this captivating franchise,” says John-Paul Brisigotti, CEO of Gale Force Nine. “Dune is a rich and wonderful universe, and we expect to produce an equally expansive and inspired line of games for years to come.”

The full range of tabletop games, including board and miniatures games are slated to hit the market just prior to Legendary’s theatrical release of DUNE in 2020. In addition, GF9 plans to align with other game companies on numerous categories and formats in the future.