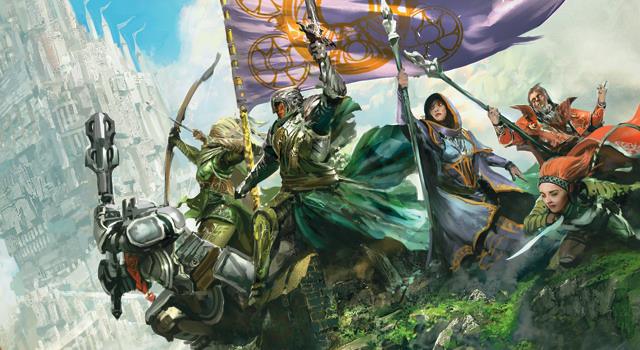 The Just Games 5E D&D Epic series is a locally-authored multi-table, monthly D&D game in which participants play characters working together to overcome major upheaval in the world. Each table will have a part to play, and the characters’ success or failure will influence the next month’s game play. Want to truly change the course of the world? Then sharpen your sword, raise your staff, gather your friends and venture forth to this epic D&D campaign!

We have 8 committed DMs and seating for 40-50 players for this event. This is a community-driven event, so come out and support your dungeon masters, eat some food, and play some D&D!

THE STORY AS IT STANDS – SESSION 1

“The Emperor is dead, killed in a violent coup staged by Duke Arikshanda of the Morning Keep.” This news is brought by a bedraggled rider, who tells the tale to as many as he can in the time it takes him to change horses. The Duke’s army is on its way, on a great Eastward sweep to purge the land of loyalists – loyalists like you.

The vanguard is no more than a day away, with the main force several days behind them. All is not lost, however. Many nobles loyal to the old Emperor, their families and allies, and any who may fear the inevitable tyranny of the Morning Duke are gathering at an ancient fortress monastery no more than 50 miles from the city of Waterford as the crow flies. There, nestled among the foothills of the Jordenstones, a defense mounts and a rebellion foments.