Escalation league is under way! Get to the table this Sunday while it’s still in its infancy, and build your next army.

The same format you loved last time is returning, with only a few small changes! Get ready to start building and painting your new army through every points level in 9th Edition! With a new scoring format for keeping track of your Escalation points and hobby progress, we’re hoping to keep players engaged and excited to get their new armies together. This new prize support format will reward different types of progress depending on what your personal goals are for the league.

Scoring this time around will be similar to last league, with a few small changes! 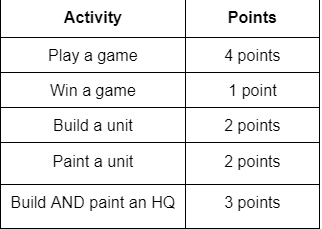 Weekly entry is $5 and will go towards the prize pool at the end of the league.