In this first expansion to Wingspan, Stonemaier Games increases the scope of the world to include the regal, beautiful, and varied birds of Europe. These birds feature a variety of new abilities, including a number of birds with round end abilities, abilities that increase interaction between players, and birds that benefit from excess cards/food. Along with the new bonus cards, they’re designed to be shuffled into the original decks of cards (and cards from future expansions).

The European Expansion also includes an additional tray for storing the growing collection of birds (past, present, and future), as well as 15 purple eggs, extra food tokens, and a colorful new scorepad designed for both multi-player and single-player scoring. 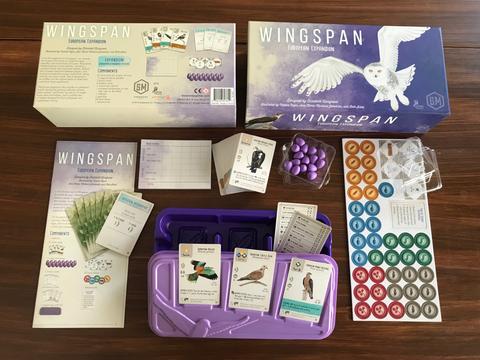 All preorders are for local pickup only, and will recieve double member reward points for prepayment. Prepaid preorders will be filled before reservations. Because Stonemaier Games have been in short supply, we add the following: all orders will be filled in the order received. Out of Stonemaier’s catalog so far, despite widely reported issues, we have failed to fill 100% of preorders on only one game, Wingspan, which we were 3 copies short on. We did not, however, have copies of Wingspan for general sale on our shelves for over 10 months. We absolutely do not want to leave anyone hanging, and preorders help us prevent that from happening. Thank you!