From the Shadowlands in the south to the Burning Sands in the north, from the Twilight Mountains in the west to the Islands of Spice and Silk in the east, Rokugan, the Emerald Empire, has stood for over one thousand years thanks to the seven Great Clans who serve the Emperor. As guardians and politicians, each clan fulfills their role in society and are as varied as they are powerful. But all are bound by the same code of honor, the way of the warrior, the code of Bushidō. Honor is valued above all else, and a misspoken remark can be just as fatal as an enemy’s blade. 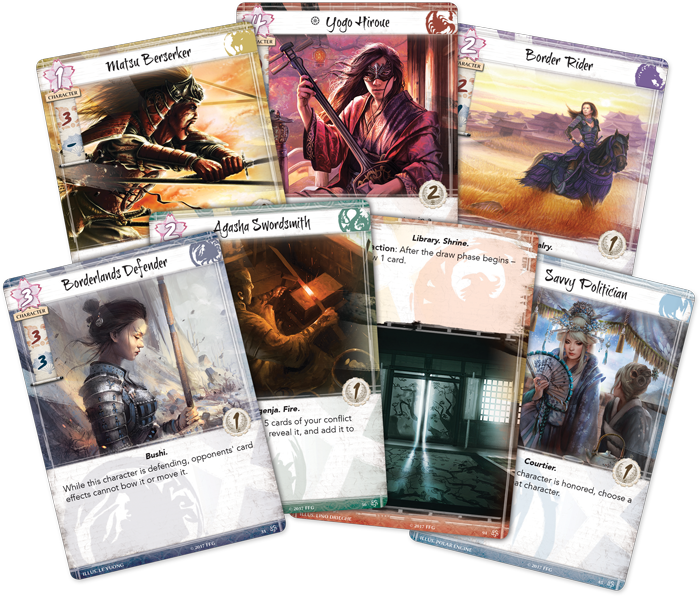 From Fantasy Flight: Originally released in 1995 as a collectible card game, Legend of the Five Rings has since thrived with its unique setting, engaging gameplay, and enthusiastic player base. Now players new and old alike can experience Rokugan like never before in the Living Card Game® format.

Legend of the Five Rings: The Card Game is a player-influenced LCG® that sees two players take on the role of one of the seven Great Clans of Rokugan, vying for military and political control of the land while maintaining Rokugan society’s strict code of honor.

Each player commands their forces with two separate decks: A Dynasty Deck fills their provinces with characters and holdings and a Conflict Deck consisting of tactics, maneuvers, followers and attachments that can be used to turn the tide in a struggle for supremacy. During a game, players will engage in conflicts, both political and military based, with the goal of breaking their opponent’s stronghold and winning the game. But the rules of society are absolute, and even in the fire of battle and heat of Rokugan’s courts, clans must remember the tenets of Bushidō, lest they lose everything in their single-minded pursuit of glory.

Now, for a bit of perspective from our owner.

Most Living Card Games sell their first print run in a matter of weeks – for those involved in the Arkham Horror Living Card Game’s launch, you’ll be familiar with the pain of trying to find a second copy after deciding you love it and want to give it as a gift around December. If you’ve been a Fantasy Flight Fan for years, like I have, you’ll know this has happened with every LCG basically since 2009. Now, I used to play the L5R CCG back in Milwaukee, and the game was hot. Deeply strategic, with beautiful art, the results of tournaments would actually influence the storyline of subsequent releases. Obviously, as a board game, this is going to be pretty different. However, from everything included in Fantasy Flight’s announcement, it is going to appeal to a huge number of people. I expect the first print run to be gone by November, at the latest.

To try and assist in gauging numbers, we are taking pre-orders for this game now. Like Charterstone, we expect this to be a game that blows away metrics on similar games. Now, we don’t want your money right now (we’ll take it, but that isn’t the goal here :)). We aren’t asking that you pay for it – just read the announcement. If, after reading, you know that this game of honor and strategy is for you, commit to a copy. That way we can be sure we have the right number of copies on hand. 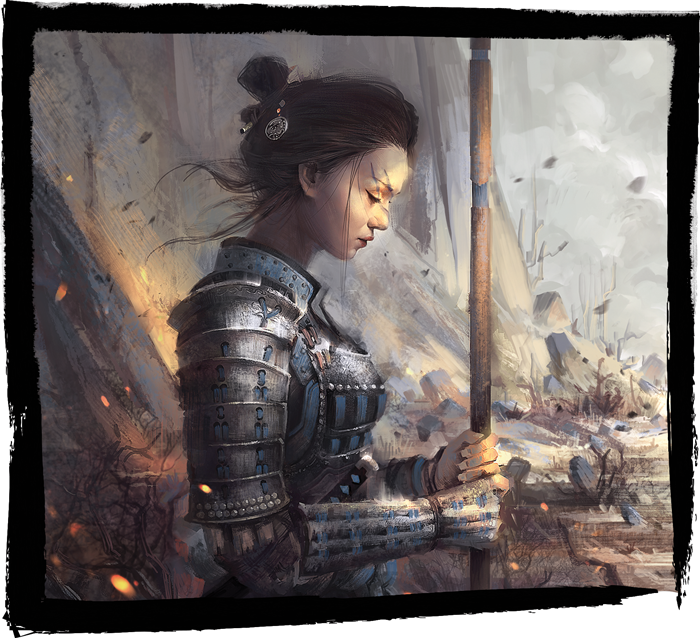 We are already planning full tournament support for this game. If you’ve been in our store recently, you’ll see some L5R art on the walls. So we’re committed – let us know if you are by putting in a pre-order below.