Just Games is proud to announce the second Age of Keyforge, landing this summer (and setting up a roughly 6 month cycle for Keyforge releases). Join us this Thursday, May 30, to play and learn this game. We have a couple of great specials on for new players (or returning players that just want a leg up).

It’s all happening this Thursday, starting at 6 pm. Want more? You can join us Sunday for casual sealed – all these specials will apply through Sunday, so come in and game, or go home and game!

Need to know more? Read on!

In 2018, legendary designer Richard Garfield introduced the world to KeyForge—a game where every deck is as unique as the player who wields it, coming pre-built and ready-to-play. Wits and tactical prowess win the day in a fast-paced game of cosmic competition where death is temporary, but glory is forever.

Along with this groundbreaking design came a lush, endlessly diverse world to call home. The Crucible, an artificial planet filled with secrets known only to the Architects, acts as the perfect setting for the world’s first Unique Deck Game, as the pieces of countless worlds gather to change the landscape every day to create something new and incredible. Now, you are invited to journey deeper into Crucible as your quest to unlock the power of this planet and ascend to a new plane continues.

Fantasy Flight Games is proud to announce Age of Ascension, the second set of KeyForge—now available for pre-order online, in store, or by calling 585-586-0586 or emailing sales@justgamesroc.com. Pre-payment earns you double points, and each full booster display will come with any relevant promotional items from this release (remember metal keys? Yeah, we’re going to help you out here if we can) 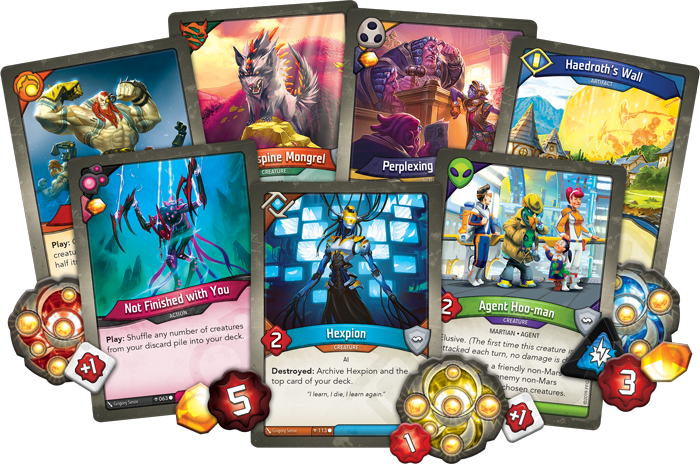 Become a new Archon in Age of Ascension! As a new set of KeyForge, Age of Ascension mixes up the cardpool with 204 brand-new cards, joining 166 cards first introduced in Call of the Archons to create an entirely new pool of 370 cards and billions upon billions more Unique Decks for you to discover, learn, and master. 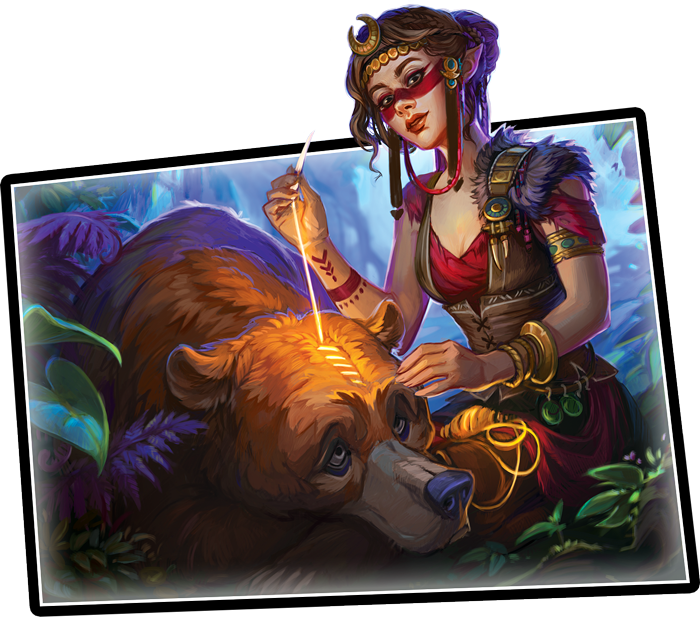 This new set further explores the gameplay of KeyForge with new keywords, restricting when certain cards can be played or freeing others from the constraints of standard placement. For example, the Brobnar are well known for their love of battle and their eagerness to land the first strike. Age of Ascension offers a new tactic for the House with cards like First Blood (Call of Ascension, 7) that feature the Alpha keyword, meaning that they can only be played as your first action during a turn. If you can establish a solid battleline, filled with the greatest Brobnar warriors, First Blood lets you open your next turn with a devastating alpha strike. 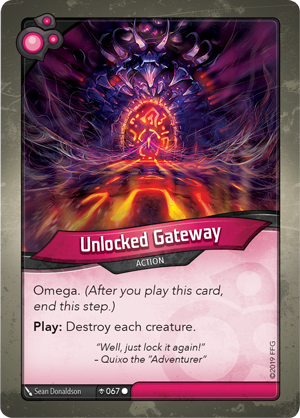 On the other end of the spectrum, the darkest creatures of the Crucible gain the power of Omega. The varied beings of Untamed can call upon a Duskwitch (Age of Ascension, 320), while the demons of Dis can make use of an Unlocked Gateway (Age of Ascension, 67) to destroy each creature—but the Omega keyword guarantees that this card must be the last card you play on your turn. While this gateway does not force you to take chains like Gateway to Dis (Call of the Archons, 59), this destructive power still comes at the cost of an opportunity, preventing you from playing any creatures unless you are willing to sacrifice them.

Finally, the new Deploy keyword mixes up your ordinary approach to building your battleline. Rather than building outward from the edges, a creature with Deploy can enter play anywhere in your battleline! You will find this keyword on only the quickest, like Lamindra (Age of Ascension, 272), and the most skilled warriors of the Crucible—those who can create order even in the middle of a chaotic clash between rival Archons. “Lion” Bautrem (Age of Ascension, 211) of House Sanctum grants power to his neighbors. With the ability to place him anywhere in your battleline, you have the freedom to select your most valuable creatures and bolster them, perhaps keeping a creature holding captured Æmber alive for a little longer, or granting one of your warriors the strength to destroy a particularly troublesome opponent. With these new keywords adding to the depth of the Crucible and the games that you play, you’ll be able to further develop your personal playstyle and discover brand-new decks that can reach their full potential in your hands. 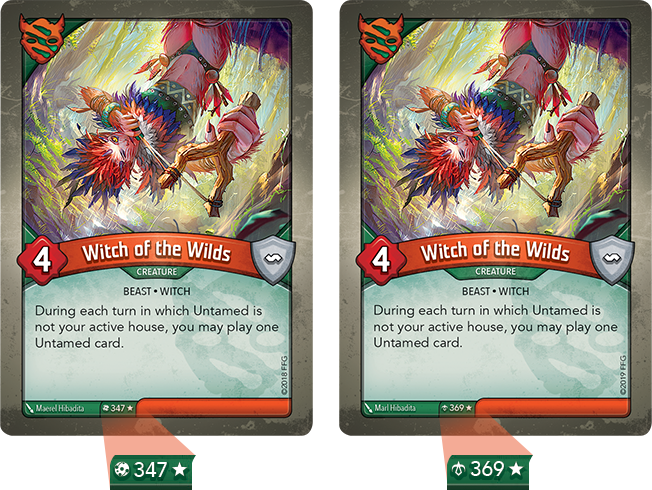 Even cards that do not carry over from Call of the Archons to Age of Ascension have the chance to make an appearance as new Legacy cards. Like the player-favorite Mavericks (which continue to appear in Age of Ascension), Legacy cards are plucked from their normal settings and placed in new situations to unlock even stranger synergies. In KeyForge, any card that has existed in any previous set can be pulled forward to become a Legacy card included in a current Archon Deck. For instance, even though Quixo the “Adventurer” (Call of the Archons, 144) is not included in the Age of Ascension cardpool, he still has a chance of appearing in your Age of Ascension decks as a Legacy card. A new age is about to begin and no one on the Crucible is willing to be left behind.

The Power in Your Hands

Beyond the cards themselves, you may notice other subtle differences in Age of Ascension, highlighted in the set’s new starter. The KeyForge: Age of Ascension Two-Player Starter Set features all the tools you need to either begin or expand your adventures on the Crucible, including two unique Age of Ascension Archon Decks, a Quickstart Rulebook, two paper poster playmats for easily organizing your play area, and all the keys, tokens, and chain trackers you and your opponent need to start playing.

Unlike the Call of the Archons Starter Set, this set does not include two standardized learning decks, and you’ll also discover that stun and increased power are now marked by tokens rather than status cards. Both the Call of the Archons Starter Set and the Age of Ascension Two-Player Starter Set provide excellent points of entry for new players, and as the game continues to grow, the power is with you to choose the option that’s right for you. 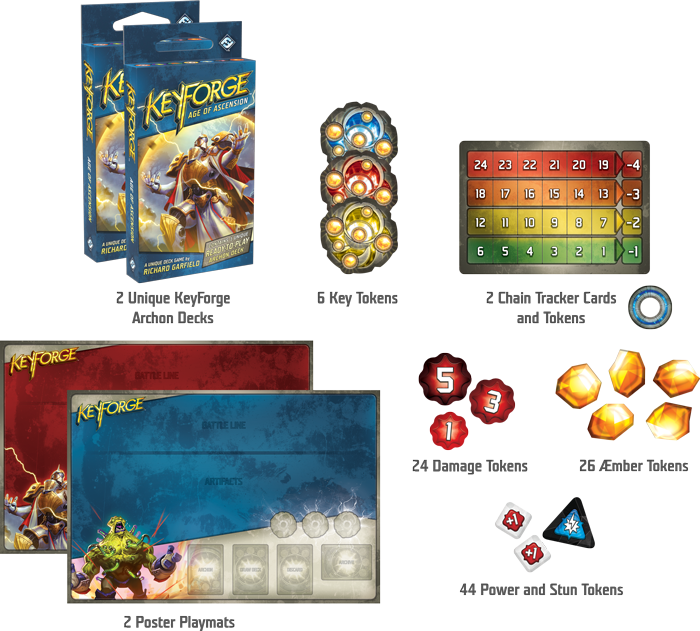 Once the Age of Ascension set lands at retailers in the second quarter of 2019, you’ll be able to track your Archon Decks from both Call of the Archons and Age of Ascension in the Master Vault at KeyForgeGame.com. Here, you can track your decks and see how they fit into the meta at large, follow the performance of other Archons across the Crucible, and stay updated on tournaments and events from Fantasy Flight Games Organized Play. As KeyForge continues to evolve, so too will the Master Vault, so keep an eye out for what secrets are emerging!

Each of the seven Houses first introduced in Call of the Archons gain new allies and tools in the Age of Ascension—and some of the most lively characters and deafening machines are found in the renewed ranks of House Brobnar. Hailing from snow-capped mountains inaccessible to all but the hardiest creatures of the Crucible, this House is known for their love of a good fight and anything that creates noise and destruction. But not all in their ranks share this desire for destruction. For example, Culf the Quiet (Age of Ascension, 20) wishes for nothing more than to be left in peace, borrowing the Elusive keyword from his fellow goblins in the House to avoid confrontation. But as a giant, Culf still possesses six power if you call him to battle, more than any other elusive creature currently in the game! 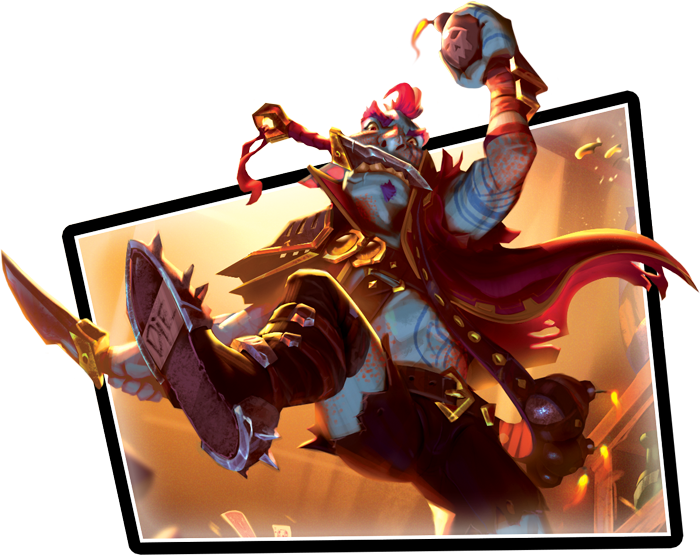 As the world of the Crucible continues to grow, you will encounter new and wondrous species in every corner of this growing planet. Among the ranks of House Brobnar, we have seen goblins, humans, and giants. But there are beings, old as the mountains themselves (or potentially even older) that dwarf even the grandest giants. Lollop the Titanic (Age of Ascension, 14) is one such creature. As a grand titan, Lollop can withstand the blows of an entire enemy team with his incredible eleven power, even if he doesn’t deal any damage when he is attacked. 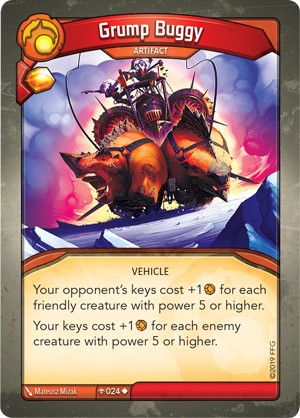 One may not think it when first looking at these intimidating warriors, but the members of House Brobnar are quite fond of pets, and in true Brobnar style, their favorite animals are those who create lots of noise and destruction, such as the Grumpus. These creatures are half wolf, half rhino, half tank, and all grumpy. Only the strong-willed Brobnar would look at these beasts and think they could be tamed. But giants like the Grumpus Tamer (Age of Ascension, 39) have domesticated them… kind of. Now, this House can use their beloved monsters to pull vehicles like the Grump Buggy (Age of Ascension, 24), which can bring your opponent’s progress to a standstill if your team possesses the power needed to control the wild beast. But perhaps they are at their most effective when the Brobnar simply aim a War Grumpus (Age of Ascension, 52) in the direction of their enemies and let it loose. There may be a whole new world to discover about House Brobnar, but they will always be the proud brawlers players fell in love with from their first appearance on the Crucible. They’re just a bit more… grumpy.

Return to the Stars

The world of the Crucible is vast—what will you uncover in your journeys? Are you ready to seek the knowledge of a new age? Let your curiosity lead you to new discoveries and step into the Age of Ascension!