Skip to the content
By Chris Jones
In Hallertau, you’ll be playing the part of a Chief of a small Bavarian village in sometime around 1850. The Hallertau is a region in Germany known for being the largest continuous hop producing areas in the country. You’ll be trading, farming, shearing, harvesting, and improving your village in order to gain the most victory points and make history!
Buy your copy here! 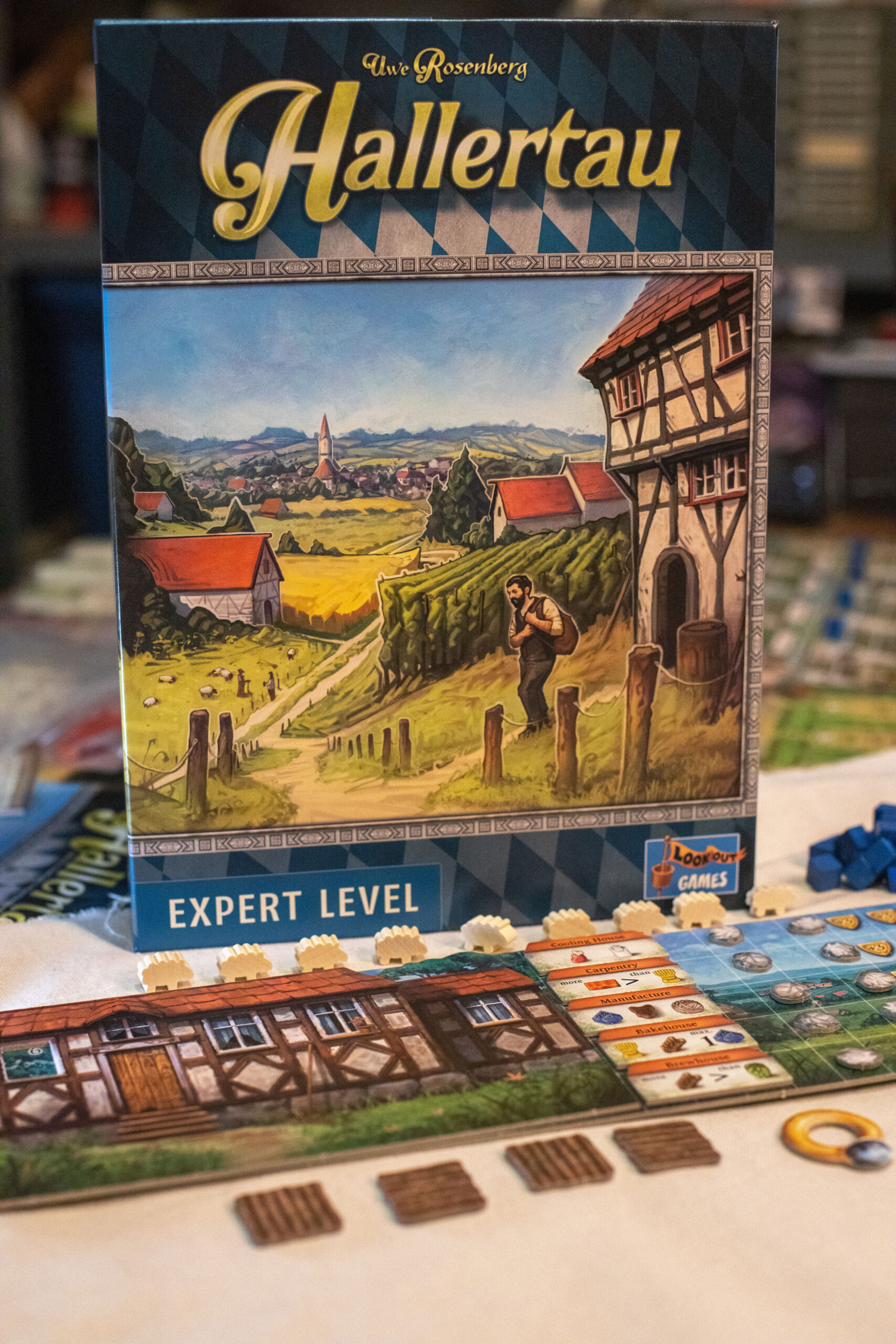 This game is an advanced worker placement, resource management, and card playing game for one to four people. That’s right, there’s actually a decent solo mode here! If you’re planning on getting your friends or family in on this one (and you should), you’ll want to do a solo run through first to get down all of the moving parts and phases that make Hallertau so much fun.
Each person who plays will be equipped with a daunting amount of player boards, cards, and beautifully carved little wooden pieces. Don’t let all of the various components dissuade you, that’s where the magic lies. The rule book has a fantastic layout and really helps guide you through the various phases of the game until you get them down. Many of the player board components are folded cardboard pieces instead of two separate ones, and all of them have very well executed artwork on them. As always, watching a ‘How to” video can be very helpful.
For the sake of this review I’ll be explaining the solo experience, as the rules change slightly based on how many people you have playing.
Let’s get started! You’ll take 4 gateway cards, and 1 point card into your hand from the Action board. You can virtually play these cards at any time if you have the appropriate resources on hand. Grab your stable board, which will have six spaces/rounds on it. Remove the first card face down, and place 6 workers on top of it. This is the beginning of Round 1, and each round will have 10 phases. A lot of these phases are upkeep and maintenance phases, so stay with me!
Then you’ll want to grab some workers, based on the number you see through the window of your Community Center, which at the start is 6. Workers can either be placed on the Action Board to gain various resources and/or take various actions, or swapped out for tools. On your Community Center board you’ll also see various buildings that you can improve by trading in resources you’ll gain from harvesting your fields and placing your workers strategically.
Tools can be exhausted to help move the boulders on the progression track of your Community Center board, allowing you to advance the various buildings in your community. Don’t disregard tools as a last option, as they can be very powerful early on.
You’ll then decide if you want to place the workers on the Action Board to gain resources, or trade them for tools. When deciding, make sure to consider your Community Board and what resources you’ll need to slide the various buildings to the right. This is your biggest way to win big in Hallertau. I suggest getting at least a few tools with your starting lot of workers, and place the rest to start gaining some resources. 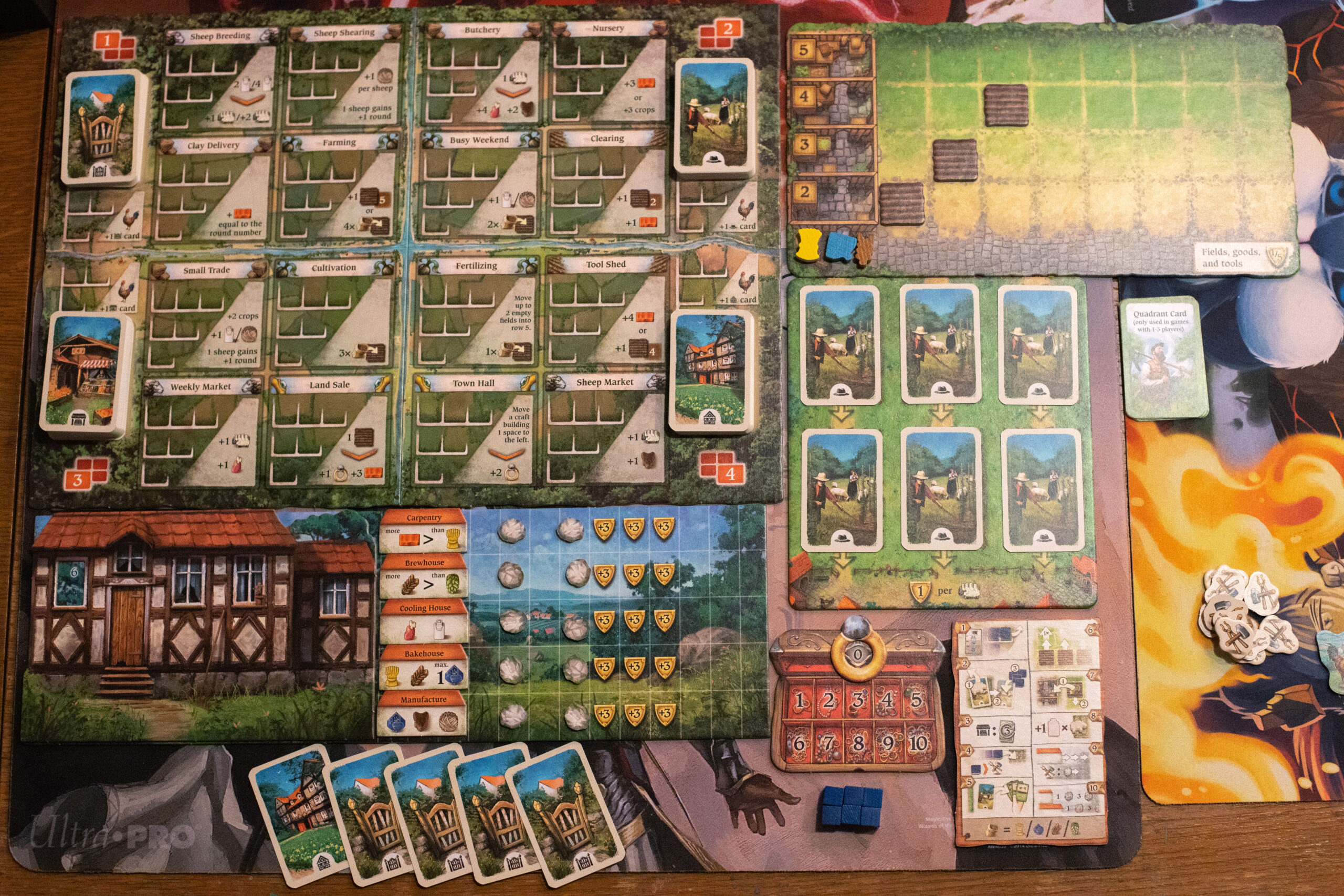 After deciding which spaces to place your workers, you’ll receive the resources associated with that space and since there are so many moving parts, resolve each worker placement immediately. Some spaces require you to have resources to gain their effects, so you won’t be picking them on your first round. Take into account what resources the buildings on your Community Center require to advance, and aim for those! You’ll see farther to the right little badges with numbers in them: those are victory points. You want lots of those!
These are not your only means for moving those buildings however. You also have jewelry at your disposal, which can be traded in to help move those buildings to the right and gain you more victory points. Jewelry can be acquired through worker placement just like all of the other resources in Hallertau. The Jewelry Board has a little ring, with the hole in the center meant to mark how much you have!
An additional reason for wanting to move your Community Center to the right as quickly as possible is that once you’ve improved enough buildings for an entire column is open between your buildings and your Community Center, it too can slide over. When this happens you’ll see that there is a higher number in the Community Center window! This increases your workers for the next round! More workers equals more resources which equals a more advanced township which equals more victory points!
Hallertau continues like this, placing workers, sliding boulders out of your way, and sliding buildings and Community Centers farther to the right of your board. You’ll be able to trade, play cards that can give you big advantages, and gain even more workers as you attempt to make your community the best hop growing community in the region!
There are still some more nuanced aspects of Hallertau to go over, but this was meant to just give you an idea of the amount of options and resources you have in this game to win! If you love building engines within a game, and strategically placing workers, Hallertau is the game for you! It will seem like a lot at first, but by the third round I had a great deal of what makes Hallertau tick within my understanding.